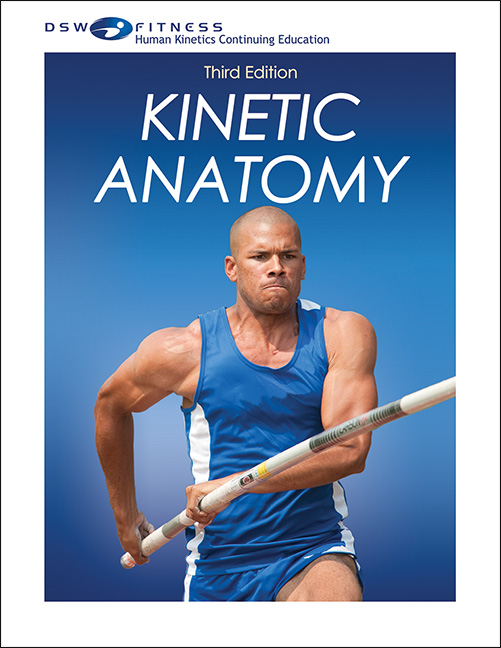 Our course of the week this week is Kinetic Anatomy, Third Edition Print CE.

Understand human anatomy for the purpose of studying movement with this continuing education course. Kinetic Anatomy, Third Edition Print CE Course guides you through the bones, joints, muscles, muscle attachments, nerves and blood vessels of the body with a full-colour illustrated text. In-depth knowledge of the anatomical structures involved with physical movement will help you to identify and correct postural problems, prevent injury, and individualised exercise programmes for your clients.

Take the course today and you will be able to identify the ligaments and tendons that attach the bones and form the major joints as well as the major muscles of the human body.

The British Association of Exercise Sciences (BASES) endorse this course and a huge 13 BASES points are on offer upon completion. The course is also endorsed by The Register of Exercise Professionals (REP’s) for three points.

At the conclusion of the course, you will take a continuing education exam to receive credits through participating organisations.
You will be able to retrieve your certificate of completion from the My Courses/Transcripts area of the Education Center and submit it to your certifying organisation. Instructions for retrieving this certificate will be e-mailed to you when your order is complete.

Robert S. Behnke, HSD, is retired after 39 years of teaching anatomy, kinesiology, physical education and athletic training courses. Behnke has been honoured on several occasions for excellence in teaching – including receiving the Educator of the Year Award from the National Athletic Trainers’ Association. During his 11-year tenure as chair of the NATA Professional Education Committee, he initiated the petition to the American Medical Association that led to the national accreditation process for entry-level athletic training education programmes.

During sabbaticals in 1982 and 1989, he served as an athletic trainer for boxing, men’s field hockey, team handball, ice skating, roller hockey, gymnastics, judo, and cycling at the United States Olympic Training Center in Colorado Springs. He is still in high demand as a speaker and an athletic trainer throughout the world.