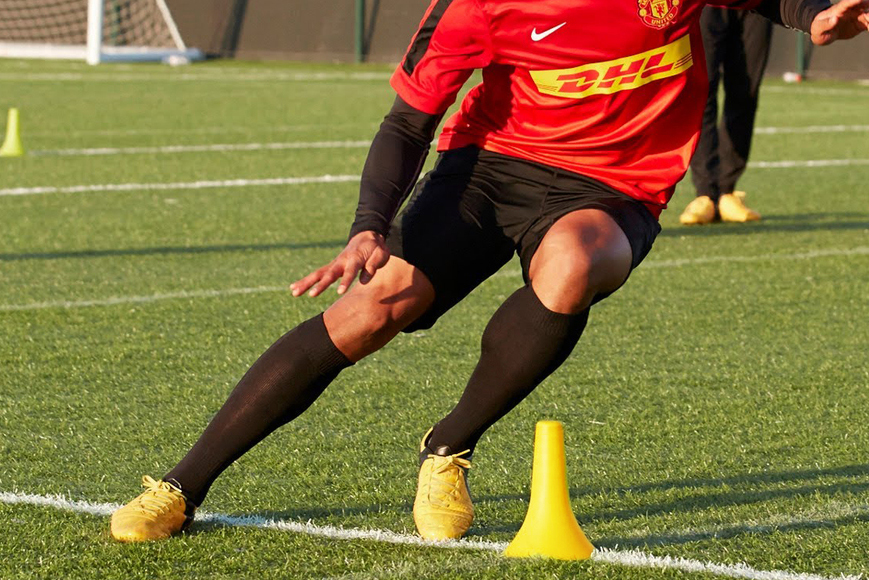 Agility is an essential skill in football. These agility drills for football will help improve speed, strength, power and acceleration within your team.

Designing agility and quickness programmes for football is extremely challenging. Mainly because it involves almost constant movement over two 45 minute periods. Given this amount of movement, agility becomes key to a player’s effectiveness. Agility training has the ability to not only enhance performance, but also a player’s overall game.

In this article, adapted from Developing Agility and Quickness, 2nd Edition, you’ll find 7 agility drills for football to help improve your overall game.

To get the most out of agility drills for football, it’s important to understand why agility is so important. Agility is the same in football as it is in any other sport. It’s about how quickly you can change direction without it affecting your balance. Footballers that are extremely agile, like Lionel Messi, can stop quickly, change directions and keep moving in one fluid movement.

Some people think that agility can’t be developed. However, it’s something attackers have to work on in order to beat defenders. Once you know how agility can improve your game, you’ll start to notice the changes once you start doing agility training.

Due to the wide range of movements needed for a full match across the various positions, designing agility drills for football can be challenging. However, by analysing the target movement specifications of the sport, coaches can classify football movements. Following this, coaches can put the movements into a basic structure and build an effective agility programme.

It’s helpful to determine what players are trying to achieve when breaking down football movements. Coaches can do this by using target classifications. At any given time, players are likely to be doing one of three movements:

Although agility training usually focuses on initiation and actualisation movements, far less emphasis is placed on transition movements. Usually, when players are taught these movements, they’re taught incorrectly. The emphasis is placed on movement speed instead of control. A player’s ability to start and move at maximal velocity usually depends on whether they’re in the right position to enable effective subsequent movement. The table (8.1) below shows the key movements within each classification.

Effective agility training balances the requirements of the exercise and the ability of the player. Therefore sessions designed for elite players should look different to sessions for beginners. Because of this, football specific agility programmes should include a progression in movement challenge and complexity as players move through the stages of development.

In the first stages, players benefit from closed drills. These allow the speed of the drills to be controlled. They often consist of single movement patterns (e.g. shuffling). At this stage, coaches should develop players’ ability in all of the identified movement patterns for football. This ensures there are no weak links in movement ability. The following list provides the system for game-speed development. As players maintain proper movement patters at one stage, they can move on to the next level.

As players develop, coaches should combine movement patterns in ways that fit football. For example, backpedal drills can conclude with sprints to the rear, side or forward. These combinations are common in football.

Coaches can also use drills that are increasingly open. Players should respond to a range of stimuli. For example, a player can incorporate backpedalling into a sprint drill. Next, players can perform a drill that sees them change direction in response to the coach’s signal. Then in response to another player’s movement. These types of drills can include a great variety in terms of distances, speeds, directions and stimuli.

The following is a sample session of agility drills for football. These drills can be used to develop change of direction speed and quickness. Ian Jeffreys suggests players start with a dynamic warm-up before moving onto more vigorous activity. This has been further explained in our recent blog post, What is the RAMP Warm-Up?. More warm-up drills can also be found in Developing Agility and Quickness, 2nd Edition.

Sessions should be designed based on the overall goal of the session and the type of player. Generally, beginners should focus on the technical aspects of performance, with less emphasis on application. However, for advanced players, it should be the opposite.

Work-to-rest ratios should ensure that each repetition is started from a state of full recovery. However, this is dependent on the player’s ability and level of conditioning. For sprint-type activities, walk-back recoveries are recommended. For agility-type activities, activity time should be in the 2- to 5- second range. Followed by an adequate rest duration to maintain performance for subsequent repetitions. Generally, 4 to 8 repetitions are recommended, although this can vary depending on duration. It’s also important to observe the session. If technique or work quality deteriorates, this might signal that players are fatigued.

Place two cones 5 to 10 yards apart. Players should begin in an athletic position facing cone 1. When ready, they shuffle to cone 2 while keeping the hips low and the hips, shoulders and torso parallel to the cones. Once the player reaches the cone, the player immediately sticks the finish position (figure 1).

Feet should be almost flat, pointed forward and wider apart that the knees. In turn, the knees should be wider than the hips. The player holds in the position for a brief pause to make sure the position can be maintained in a stable manner. There should be no further movements during the pause. Once stability is achieved, another movement can be started.

Place two cones 5 to 10 yards apart. Begin in an athletic position facing cone 1. Move laterally from cone 1 to cone 2. When the player reaches the cone, they should plant the outside leg and explosively push back to move in the opposite direction.

Run to Cone and Cut

Place two cones 5 yards apart. Have the player assume an athletic position next to cone 1 and facing cone 2. With a self-start, tell the player to run towards cone 2. Once the player has reached the cone, they should make a cut step and then accelerate in the opposite direction.

For an open version of this drill see figure 3. The coach stands 2 yards behind the second cone. The player runs towards cone 2 as before, however before they reach the cone, the coach should give verbal or visual signals to instruct them to move in a certain direction. The player should make a cut step and accelerate in the given direction.

Get to the Point

Place two goals (or two sets of cones) 10 yards apart. The defender starts a few feet away from the attacker, as in a game situation. On the coach’s signal, the attacker tries to cut and move either to the near post or to the far post. To add another element, another player can deliver a ball to the attacker on the cut towards the goal. The attacker then tries to direct the ball into the goal, whilst the defender tries to clear it.