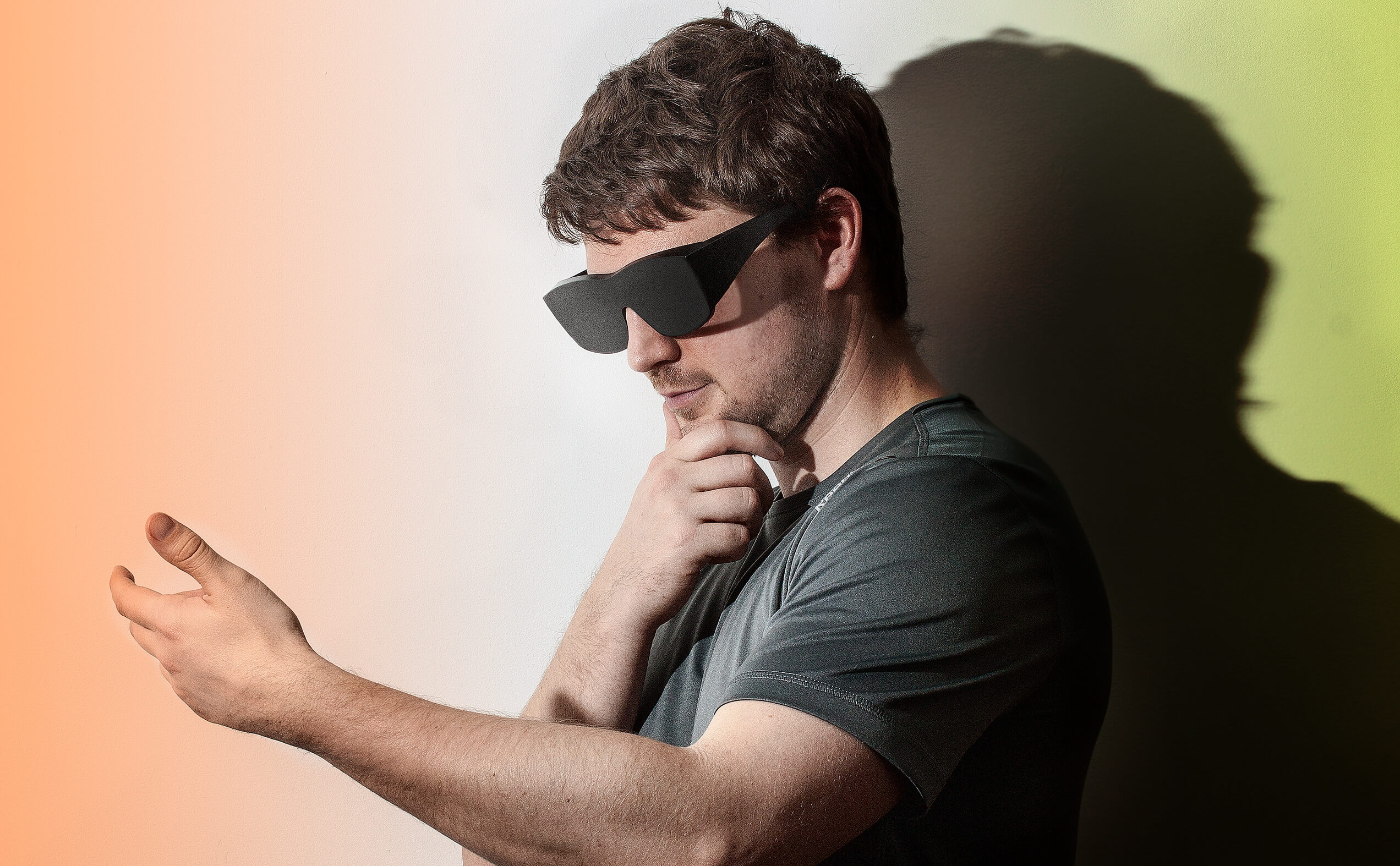 Researchers at Human Kinetics publishers have invented the world’s first virtual reality book. Virtual books or v-books are the latest attempt by the publishing house to attract younger readers who spend most of their time reading in non-traditional formats.

Sales and Marketing Director Kurt Landers explains the company’s new vision. “Our market research clearly showed that while some people enjoy the convenience of an e-book, others miss the look and feel of a traditional print book. V-books combine the best of both worlds. The inconvenience of a print book with the feel of an e-book. Of course, you can’t physically feel a v-book. But, you know, you can feel a v-book. Plus it’s like a video game so the kids will love it.”

The idea for v-books first came to him one evening at his local gym. “We’ve all seen people reading on the treadmill. But have you ever seen anyone reading whilst using the squat rack? Or whilst doing a bench press? No, of course you haven’t, that would be stupid. But that’s what we’re all about now.”

The advantages of books that can be read ‘hands-free’ do indeed have significant implications for a physical activity publisher. So much so that the company has invested millions in this new technology which has taken years in research and development to come to fruition.

The head of the technology group Maximilian Hoffenheimer makes no bones about the product’s much-delayed release. “Look the learning curve was unbelievably steep. You know moveable type, printing as we know it, it’s been around for about 500 years. That’s a long time to get good at something. When you’re suddenly given a 12-month window to invent a completely new paradigm you’ve got your work cut out for you. Especially when you spend the first six months prototyping with construction paper.”

Indeed, there were times when the whole project seemed unrealistic. But the breakthrough came when researchers realised that the key to virtual reality books might lay in an alternate reality. Events changed dramatically one frosty morning in December 2013.

On that fateful day the company cleaner, Lou had arrived early to do her usual rounds when she discovered something incredible. She had beaten herself into work. “I couldn’t believe me eyes, she made me jump out of me skin!”

Against all odds, where once there had been one Lou, there were now undeniably two Lous. It took several weeks for the team to understand what was going on. It was an intensely confusing and frustrating time but in fairness to Lous the building was spotless.

New Lou, as she became affectionately known, had little to offer by way of explanation. When questioned how she came to be, she would only respond by asking who had replaced her superbike with a scooter and “When did we start using that new hand wash?”.

Then when all seemed hopeless, a chance discovery threw new light onto the whole situation. Hidden in a small cupboard in the gent’s toilet, nestled between an electrical box and an asbestos warning sign: a portal to another dimension. But where had this portal come from and more importantly, where did it lead? Warehouse operative John Michaels, the only member of the team to have a Masters in Quantum Mechanics explains…

“Of course, trying to explain in laymen’s terms what is actually happening here is just out of the question. I’m not going to waste my time. I mean, I could tell you, but it’d do as much good as explaining the finer points of infinite regression to a kumquat. Look, the maths is just like whoah and the science Prrrrfffff!!! (Makes a gesture as though his head is exploding.) If you want the dumbed down version go ask Kurt. He’ll do you a ven diagram.”

So after inadvertently creating a bridge between two parallel realities the v-book project moved into a new phase. Theoretically, once the team successfully found a way to harness the power of inter-reality travel (Inter-realing), all they had to do was find a reality in which virtual books already really existed. Then steal one and scarper before getting caught. But how could they be sure such a reality even existed?

The team were quietly confident. Given an infinite number of realities and enough time, logic dictated that everything can and must happen. Even so, it took several more years to find the right reality. “It was almost like all the universes were trying to tell us something. Even in the most technically advanced utopian realities, where civilisation had overcome all pain, greed and suffering people still had their noses in paperback books. It didn’t make any sense!”

But at long last in a reality they named BS01/04/17 the team finally found what they were looking for. Amazingly v-books had been invented by a 12-year old child prodigy by the name of Cory Matthews.

Cory had just received his fourth place certificate from the head teacher at his school’s science fair when from out of nowhere a bunch of bookish looking people rushed the stage and swiped the machine before apparently escaping trough a gymnasium wall. Cory was inconsolable.

Subsequently, some parties have questioned Human Kinetics’ operating policy in this matter. But Chief Procurement Officer Michael Johnston Jnr remains steadfastly unapologetic. “Show me the law that says you can’t steal an emerging technology from a small child in an alternate reality. You can’t. So there. At worst you could call us early adopters.”

Once the v-book device was safely in the possession of the Human Kinetics team it was then simply a matter of reverse engineering a commercially viable product.

The first attempts were clumsy and relied on cumbersome headgear which directly augmented the wearer’s perception of reality through a large electrode attached to the frontal lobe. Users could see a virtual book floating in front of their eyes but there were complications.

Test subjects of the prototype v-readers reported feelings of nausea and looking stupid.

Aesthetic concerns aside (the helmets did looked pretty silly) many bugs still remained to be worked out of the software/inter-face interface. Not least the one that made test subjects recite every word of Music Applications for Exercise and Sport backwards whilst running on the spot.

Eventually, the team realised it would look better and be safer and easier to work with the glasses model. Like Google Glass but not so creepy. As one internal memo put it at the time, direct cerebral interference was “As potentially un-harmful as practising brain surgery on oneself.” After this change in direction things really began happening apace.

For the launch of the first generation of devices, the marketing team chose black, although there are plans for a rose-gold v-reader pro version in the future. “We wanted something that looked sleek and tactical but classic. Like what Robocop would wear when he wanted to v-read (Sic.) Pride and Prejudice. We also came up with that word “v-read” too. Use it in a sentence? Sure. Have you v-read any good v-books lately? Jeff came up with that.”

Despite the new found direction and optimism, however, feedback from early focus groups was still largely negative. Consumers initially struggled with the basic concept and even simple features. For one thing, you can’t put a bookmark in a v-book without it falling to the floor. Also, people still missed the smell. But undeterred, solutions were found in the form of optional accessories.

Available at launch will be a small range of canisters containing associated smells for v-reader readers wanting a deeper sense of immersion in the virtual book world. Consumers will initially be able to choose from Closed Council Library, the classic New Book Smell and Papaya and Grapefruit. Specially designed earphones will also be available for those wishing to virtually “v-read” an audio book or “v-audiobook”. And expeditions to find a reality where virtual bookmarks exist (V-bookmarks) are already underway.

So what does the advent of v-readers mean for traditional books and e-books?

The advantages of v-readers are numerous and obvious Landers asserts. “Take batteries for instance. Traditional e-readers have a finite battery life. And books, forget it, they don’t even have batteries. Rubbish. But a v-reader needs up to 70% more batteries.”

To summarise, Mr Landers misquotes the bestselling novelist, semiotician, philosopher, essayist and literary critic Umberto Ecco. “He said once you have invented something like a book, you cannot uninvent it. But I disagree. We’ve proved that so-called intellectuals are stupid. It’s about vision. I mean look at the scientific community. They missed the point completely. Yes, we now have undeniable proof of infinite parallel universes and the means to explore them but, bigger picture, you can now do a pull-up whilst reading a Human Kinetics Journal article.”