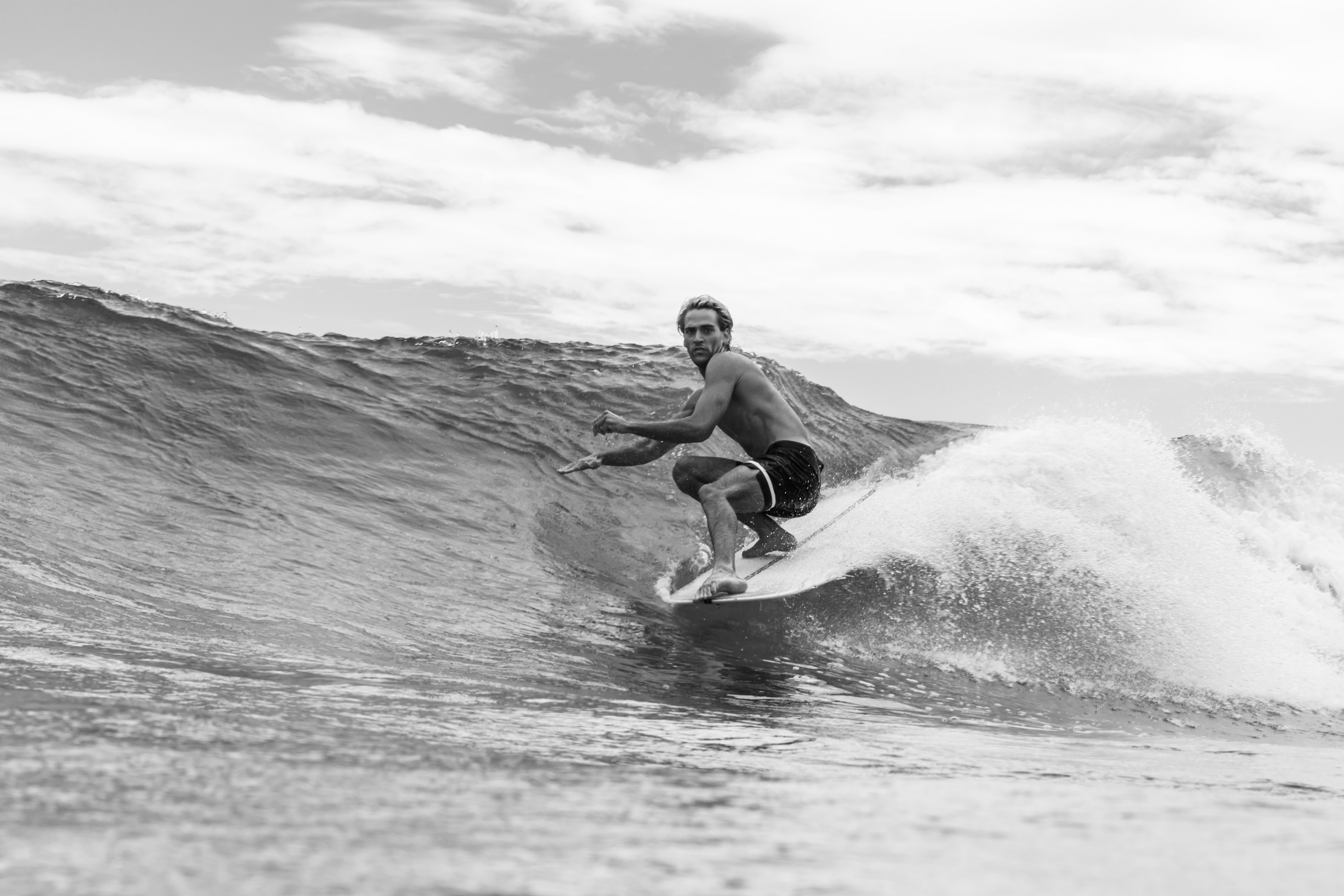 Surfing, while often claimed by Californians, Australians, and South Americans, undeniably derives its roots from Polynesian culture. This is where the history of surfing began.

This post adapted from The Sports Rules Book, 4th Edition explains the history, rules and equipment needed to dominate the surf.

Surfing was almost lost with the arrival of white missionaries on the Hawaiian Islands. Christian missionaries associated surfing with pagan practices and quickly went about trying to wipe the practice from Hawaiian culture. Maintained by a small group of dedicated Hawaiians, surfing arrived on the west coast of the United States in the early 1900s and was quickly adopted by groups often considered outsiders.

Today, surfing is a global sport and a billion-dollar industry. Equipment design has changed in recent years. Fourteen- to fifteen-foot wooden boards have given way to shorter boards made of foam and that promote buoyancy, and accessibility for a global community of surfers.

Given this and other technological advancements—notably the human-made wave pool—surfing was chosen to debut at the 2020 Summer Olympics. Kelly Slater, one of the most renowned professional surfers in the modern era, once described professional surfing as a combination of gymnastics, dance and sport. While there are a number of organizations that facilitate surfing competitions, the professionally recognised organisation is the International Surfing Association (ISA). The ISA has been in existence since 1964 and includes competitors from 100 countries across five continents.

The objective is to reach the highest point total in a field of competitors based on a surfer’s two highest-scoring waves.

Surfers are judged on their two highest-scoring waves out of 10 to 15 waves caught.

Heats and finals are 20 to 30 minutes long as chosen by the contest director after consultation with the head judge. Variations to heat times can be made when there isn’t enough time to complete an event.

The venues for professional surfing events vary from nation to nation. Typically, surfers are given a certain location within a surf break to compete in. This is dependent on the type of waves, such as beach break, reef break, or point break.

The World Surf League (WSL), previously known as the Association of Surfing Professionals (ASP) is the governing body for professional surfers. It’s dedicated to showcasing the world’s best talent in a variety of progressive formats.

How the surf league developed

In 1976, Hawaiian surfers Randy Rarick and Fred Hemmings organised a collection of unaffiliated pro surfing events around the world into the first world championship tour by developing an international ranking system and encouraging the world’s best surfers to get involved. This is when the International Professional Surfers (IPS) was developed, the original world governing body of professional surfing.

In 1983 the Association of Surfing Professionals (ASP) was launched by Ian Cairns. This effectively pushed aside the IPS who were left to operate only the Hawaiian pro events.

At the start of the 2015 season, the ASP changed its name to the World Surf League (WSL). The WSL has remained the predominant surfing organization and sanctioning body for professional surfers since its formation.

The locations vary slightly year on year, however, Australia, the USA (Hawaii and California), South Africa, Brazil, Indonesia and Portugal are the most popular countries. Countries which have hosted a CT event in the past include Fiji, Puerto Rico and Spain.

Typical modern surfing equipment consists of a board, a leash and occasionally a wetsuit. Some may even wear a helmet and a personal flotation device (PFD).

Boards used during world championship events typically feature a tapered nose, a wide beam with a sharp, angled, or curved “rail” or side, and fins located at a tapered tail used for manoeuvring the surfboard. For most professional surfing competitions, there is no regulation of board design.

During specific competitions, such as longboard, stand up paddle boarding, kneeboard (must be ridden on knees), or bodyboard (flexible with soft exterior skin, no more than 5 feet long, fins optional), there are board design specifications that must be taken into account. Longboards must be at least 9 feet from nose to tail, with a minimum width of 47 inches. Width is regulated within 12 inches of the nose and tail of the longboard.

Professional surfing has fewer rules than most high-performance sports. Throughout the history of surfing the rules have only slightly evolved to ensure the safety of the athletes, the fairness of competition and the promotion of elite surfing.

A minimum of 18 inches (0.5 meters) of wave height is needed for the surf to be contestable, but on the last day of competition, if there is a lower wave that is rideable, an allowance may be given.

Judges’ decisions regarding allowable waves in and around the buffer zone—an area used to separate two podiums (where judges are able to view the wave without obstruction) where no competition is to be held—are final, and no appeal is allowed. Buffer zones should be at least 100 meters wide and limited by lines of sight between a beach flag and a contest buoy set in the water. A surfer may catch a wave in the direction of the podium from near the buffer zone line or in its edge, but if the ride goes into the buffer zone, it is not required to be scored.

Any surfing in the wrong podium may result in the participant receiving an interference penalty or a fine or both. Sirens are used to signal the start (one blast) and finish (two blasts) of each heat. A visual warning and a public-address system warning are given when five minutes remain in a heat.

Surf competitions are made up of rounds and each round consists of multiple heats where, depending on location, two to four surfers compete at any given time, with each looking to lock in their two highest-scoring waves. A minimum of 50% of surfers in a heat advance to the next round.

Heats are typically between 20 and 30 minutes long. Scoring is based on a 10-point scale with a total of 20 possible points available in each heat. Performances are scored by a panel of five judges. To reach a competitor’s score for each wave, the highest and lowest scores from the judging panel are omitted and the three remaining scores are averaged. The two highest-scoring waves are added together to become the participant’s heat total.
Judges analyse the commitment, degree of difficulty, innovation, progression, combination, variety, speed, power and flow of all manoeuvres.

Performances are scored on the following scale:

Rankings from multiple surf competitions are added together to determine a surfer’s placement in the competitive tour. Surfers are awarded points following their events. A surfer’s placing and current performance determine the number of points they receive.

Wave priority is allocated to one person during a heat. The surfer who is given priority has the right of way to catch any wave. Other surfers in the heat are permitted to paddle for and catch the same wave, but only if they do not interfere with the scoring potential of the competitor with priority. A surfer can lose priority by missing the wave or taking off closest to the peak. If two or more surfers catch the same wave, the surfer to make it to the take-off zone first is given priority.

A surfer who hinders the scoring potential of another surfer who has priority over him receives an interference penalty. In most situations, this means that the penalised surfer’s heat score will only consist of the best wave value. If the same surfer interferes twice during a heat, they are disqualified from that heat.

Surfers may only proceed when the previous heat has ended; otherwise, they face a penalty. It is considered an advantage if a participant reaches the takeoff area before their competitors. If this occurs, the surfer is banned from riding until the first wave is caught by one of the other competitors.

If a surfer in competition rides a wave out of his designated area, the judges may use their discretion to either score the entire ride or only to score a portion of it. In this situation, the surfer may not protest. Surfers may not ride during other heats and they may be penalised with a fine or disqualification or both. Waves caught during dead time between heats are not scored, but no penalty or fine is applied.

A competitor is responsible for the number of waves caught. If he/she has caught more than the maximum number of waves permitted within the time limit, they are penalised for each additional wave caught.

A surfer is also penalised if an additional wave clearly deprives another competitor of an available ride. If a caddy rides a wave, the surfer the caddy is supporting may be penalised. If the caddy interferes with any of the other surfers in any way, interference is charged to the surfer for whom he/she is caddying.

If no one catches a wave halfway through , then the head judge can restart the heat.

Slang Jargon of the Surfing World

The more fun and some would argue the more important terms of surfing are the slang terms. Before you get anywhere near standard you need to learn the slang. Throughout the history of surfing the slang has evolved and developed. Here is a list of some of my favourite slang terms.

The contest director oversees all judges and contest officials during ISA events. This includes the head judge or judges. All officials for professional surfing competitions are appointed directly by the ISA based on professional, international and national criteria. While the contest director is responsible for overseeing the event with support from the head judge, enforcing competition rules and seeding competing surfers, he is not directly responsible for judging individual surfers during heats. It is the responsibility of the head judge and associate judges to score individual surfers during events.

Throughout the history of surfing slight modifications have evolved. While most rules and regulations hold true for all world championship events (men’s, women’s, juniors, boys, and girls) there are some specific modifications, mostly in the form of team size. This is dependent on the individual ISA-sponsored event and location.

In extreme conditions, water caddies may be allowed to help surfers in a defined marshalling area. Once the heat begins, competitors are only permitted to use equipment from their own caddy. No communication is allowed between a competitor and the caddy unless it is a hand signal for an equipment change.

For more on the history of and coaching take a look at some of these journals and articles.

We have published dozens of articles on surfing you can check them out on our journal’s website.