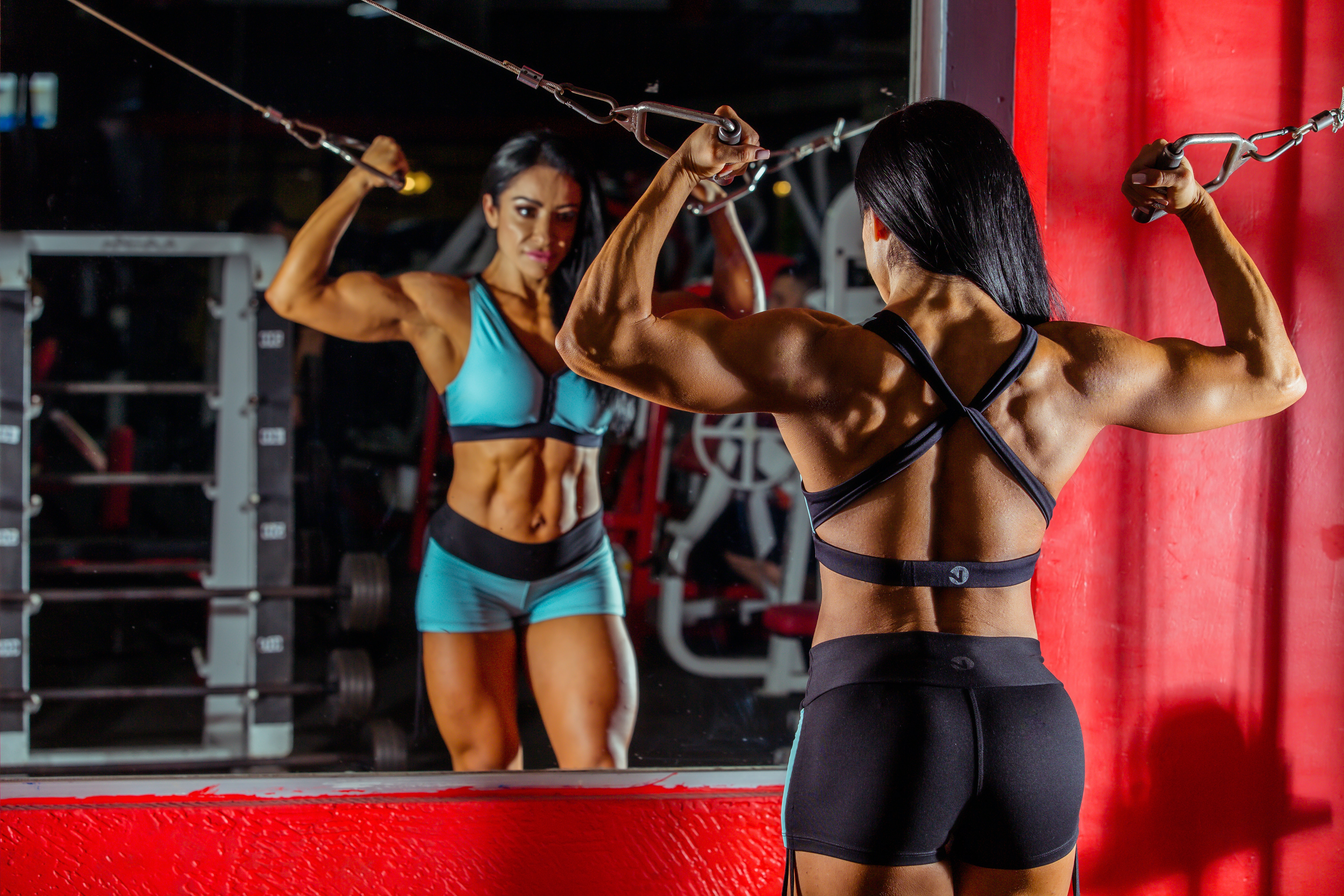 Selecting the appropriate exercises is an important factor for maximizing whole-body muscle hypertrophy. For example, certain muscles have multiple attachments that improve leverage for movement patterns. Moreover, myofibers often are subdivided into neuromuscular compartments, each of which is innervated by its own nerve branch. Functionally independent muscle segments facilitate the central nervous system’s ability to fine-tune human movement for optimum efficiency during complex motor tasks. Importantly, these inter- and intramuscular architectural variances reinforce the need to adopt a multiplanar, multiangled approach to hypertrophy-oriented training using a variety of exercises.

Maximal hypertrophy can be achieved only by systematically varying the exercise performed and fully working all aspects of the targeted musculature. We explore how to employ these strategies to maximize hypertrophy in various major muscle groups.

The rectus abdominis is the primary muscle responsible for carrying out spinal flexion. Given its role in spinal flexion, variations of the crunch are viable options for dynamically working the rectus abdominis. Although somewhat speculative, there is a sound rationale for performing traditional crunch variations to target the upper abdominal region and performing reverse crunch variations to develop the lower aspect of the muscle. This hypothesis is consistent with the anatomical design of the rectus abdominis. Not only do the tendinous intersections suggest some degree of functional independence of the muscle, but its upper and lower aspects are segmentally innervated by the ventral rami of the lower six or seven thoracic nerves, providing a further mechanism for selective activation. Indeed, professional tennis players demonstrate greater hypertrophy in the nondominant compared to the dominant side of the rectus abdominis, particularly in the more distal regions, indicating that humans can differentially recruit both sides of the rectus abdominis as well as the upper and lower regions of each muscle during exercise performance.

Electromyographic research investigating the ability for reverse crunch variations to enhance muscle activation in the lower abdominal region has produced conflicting results; some studies observe a beneficial effect, whilst others fail to note significant differences in activation between regions. A potential explanation for discrepancies between findings is that benefits may depend on consciously tilting the pelvis backward by drawing it up toward the umbilicus (posterior pelvic tilt) while performing the exercise. This was elegantly demonstrated by Sarti and colleagues, who found that activation of the lower abdominals was predicated on the participants’ ability to initiate proper performance of a posterior pelvic tilt during the reverse crunch. Although some practitioners have cautioned that performing spinal flexion exercise is injurious to the discs, the body of evidence does not support such claims in people free of spine-related conditions.

The internal and external obliques assist the rectus abdominis in spinal flexion. However, they also are the primary muscles responsible for both rotation and lateral flexion of the spine. Thus, including exercises such as variations of side bends and rotational movements may help to optimize their development.

Isometric exercises also can develop the abdominal region. Planks and bridging movements statically work the musculature in a manner that can provide an additive abdominal stimulus. However, these movements are traditionally performed with body weight, and thus can be self-limiting based on a person’s individual abilities; it can be difficult for well-trained people to overload the abdominal muscles using these exercises. To reap benefits, it is necessary to make the movements progressively more challenging by modifying aspects of performance. For example, the plank can be modified by moving the elbows superiorly toward the ears and engaging a posterior pelvic tilt; this significantly increases activation in the rectus abdominis and oblique muscles.

The back muscles benefit from being trained in all three planes of movement. The frontal and sagittal planes, in particular, should be exploited to optimize muscular development. The latissimus dorsi (lats) are maximally stimulated by humeral adduction carried out in the frontal plane. The pull-up and lat pulldown exercises using a pronated grip are excellent for targeting the lats. Grip widths in these movements show minor differences in muscle activation, but varying these positions from shoulder-width to twice shoulder-width distance may help to fully stimulate the musculature .

Single-joint shoulder extension exercises in the sagittal plane such as the pullover are often recommended for lat development. There is evidence that muscle activation in the pullover significantly favors the pectoralis major more than the lats, and the level of activation depends on the external force lever arm produced . However, the pullover exerts a great stretch in the lats at the start position, which may accentuate growth via increased myodamage or perhaps other factors related to stressing a muscle at long lengths under load. Therefore, the pullover, with a focus on accentuating the beginning phase of the movement, can be a useful addition to a hypertrophy-oriented routine.

The midback muscles (middle trapezius and rhomboids) are best targeted using sagittal plane exercises (e.g., bent-over row and seated row). A neutral grip reduces biceps brachii activation, which seemingly allows the back musculature to carry out a greater amount of work. Despite a logical basis, there does not appear to be an added benefit to actively retracting the scapulae during rowing movements.

The pectoralis major is maximally activated in the transverse plane using horizontal adduction movements. Both multi-joint exercises (horizontal, incline, and decline bench press) and single-joint exercises (horizontal, incline, and decline chest fly) are viable choices to develop the chest musculature. Pressing movements allow for the use of heavier loads, and the chest fly provides greater isolation of the target muscles at the relative exclusion of assistors. A combination of both types of exercises therefore conceivably maximizes the hypertrophic response, although evidence for this hypothesis is lacking.

The pectorals can benefit from the use of a variety of training angles. The sternal head is best targeted during flat supine exercises and decline exercises whereas the clavicular head is more aligned with gravitational forces when the torso is inclined at an angle of 30° to 45°. Hand spacing also influences pectoral muscle activation. A narrow grip elicits greater activation of the clavicular head. This is likely due to the fact that a narrow grip brings the elbows close to the torso, which makes the exercise a sagittal plane shoulder flexion movement. Single-joint overhead shoulder extension exercises such as the dumbbell pullover substantially activate the sternal head of the pectoralis major, making it a viable addition to a comprehensive training program.

Torque angle during chest training also must be considered with respect to the modality of exercise. Barbell and dumbbell exercises heavily load the pectoralis major in the early phase of movement, but the musculature becomes increasingly unloaded at the finish position. Conversely, cable pulleys and many machines allow for a more constant muscular tension throughout the range of motion (ROM), which enhances muscular stimulation and metabolic stress in the pectorals. Thus, employing a variety of modalities would seemingly benefit hypertrophic adaptations. The addition of bands or chains can help to balance out the strength curve in free weight exercises, potentially enhancing their effectiveness.

Shoulder rotation also must be considered when working the deltoids. The shoulder press, a frontal plane exercise, is generally thought to target the middle head of the deltoid. However, because the shoulder joint is externally rotated during performance, the anterior head is placed in a position to directly oppose gravity and thereby receives the majority of stimulation; the middle and posterior heads are substantially less active. Internal shoulder rotation is needed to place the middle head in a position to directly oppose gravity, which is naturally accomplished in the wide-grip upright row. Similarly, an internally rotated shoulder (i.e., pinky up) should be maintained during the lateral raise for optimal stimulation of the middle deltoid. An externally rotated shoulder position during horizontal abduction exercise was shown to best target the posterior deltoid, although personal preference seems to be most important given the fairly large interindividual responses noted between subjects.

Science and Development of Muscle Hypertrophy