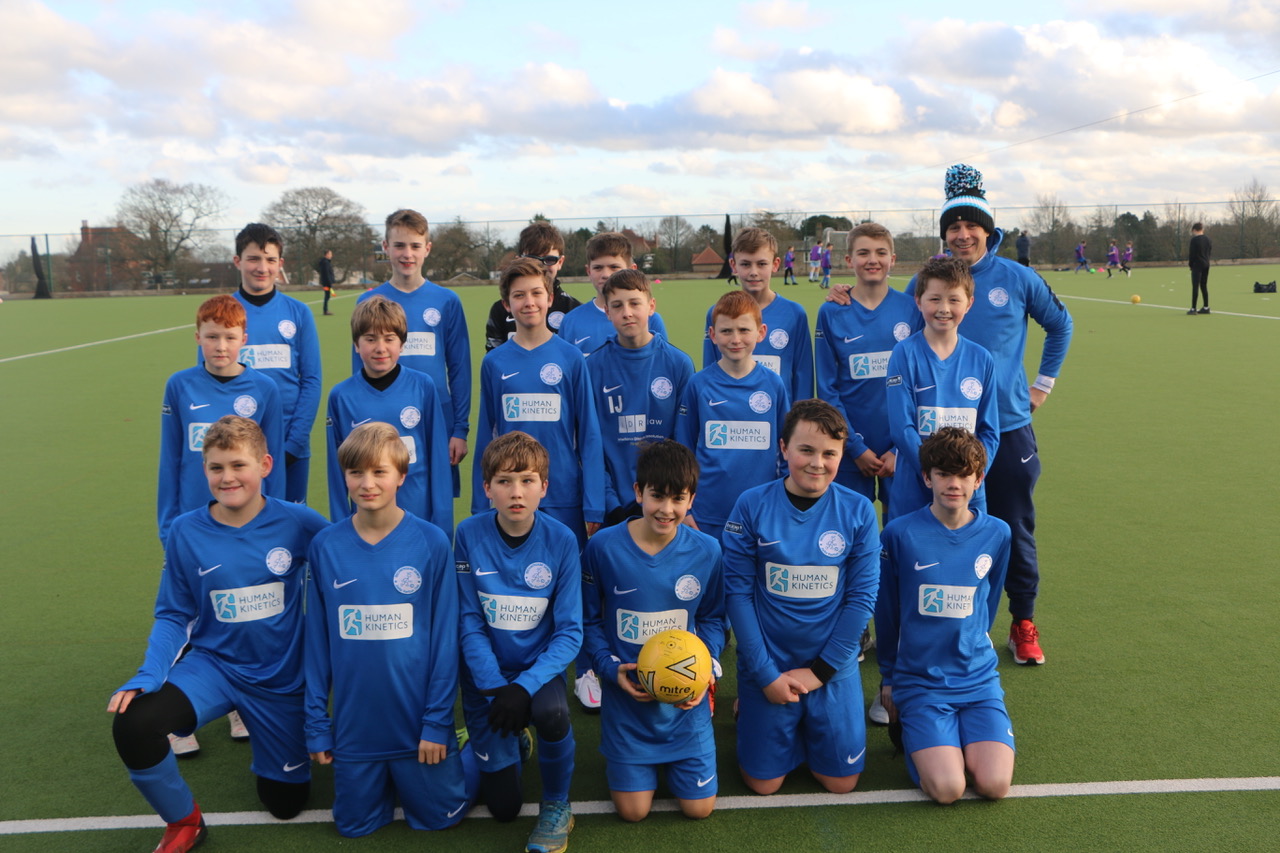 In this post we speak to Tony Page, Volunteer Football Coach for Beckwithshaw Saints Junior Football Club. For the past 3 years Tony has coached the under 13 boys team, which Human Kinetics now proudly sponsor.

We wanted to catch up with Tony to find out more about his experiences and insights as a volunteer football coach.

How did you get into coaching?

My son, Oli, began playing for Beckwithshaw Saints. At training most parents stood politely in the parent zone. However I couldn’t stand still and used to prowl around the pitches intent on learning and inwardly critiquing what was going on!

It was clear there was an unofficial A team and a B team. Oli was in the B team due to his late start into football and this team received much less attention from the pre-existing coaches.

I took a keen interest from the side-lines, and whilst I didn’t for one minute assume I could do better, I felt sympathy for the B team, who were missing out on matches, and missing the focus of the myriad of coaches. The head coach at the time approached me, and asked if I would be prepared to help coach the B team. How could I turn that down!? It was a challenge I felt helpless to refuse.

My mission from that point on was to take the underdogs and turn them into a team that could both enjoy their football and get the attention they deserved.

How do you perceive your role as a coach?

I coach adults a lot in my working life outside of football coaching. Of course, adults and kids are totally different beasts to coach, but the purpose is the same. It is all about bringing the very best out of people, helping them to identify and then maximise their own potential. In most cases, be it business or football, it’s not just about the individual, it’s about the role each individual plays in the whole. The ‘whole’ in this case is the squad/team.

I’m just a facilitator in all this, there to help create an environment in which the players can best learn as both a collective and as individuals.

What makes a good coach?

It takes all sorts to make a good coach. I’d say each coach is very different too, but some common themes I see in coaches I respect and admire are:

Take us through a usual coaching session

The sessions do vary quite a bit, however a usual session would look something like this:

What aspects of your coaching do you feel have the greatest impact on players’ performance?

I’d say, without a doubt, my demeanour is everything. If it is upbeat, energetic and positive then the chances are it’ll be a good session. If I am feeling low, miserable or negative it’ll turn out to be an awful session…unless I get lucky!

If it is a good session, then I’m pretty sure the kids have learned something, had fun and therefore made steps forward. Even if I was technically a very poor coach of football technique and tactics, we’d still make improvement if I had a positive style and threw myself at it.

So, in my view, the next most important aspects following demeanour are:

Then one final aspect, which almost certainly, at an individual level, impacts a player the most, is my belief in them!

If I demonstrate my belief in them (over and over again in different ways) they build confidence and they can perform without fear of the consequences of mistakes. This is fundamental to each of them reaching their potential, and doing so without feeling too much stifling pressure.

How do you maintain team morale, especially during times when performance hasn’t been at its best?

As a coach you are never satisfied after a training session that everything was just as it should have been. If you were then I’d argue you don’t have ambition or relentlessness. It’s the same for matches. Even if you have a brilliant win, after 30 minutes of elation, high fives, awarding of praise to all, and writing a great match report, you start pondering next week’s game against a tougher opponent. You start wondering why you didn’t score more, let in less, pass better etc.

So, win, lose or draw as a coach you internalise your challenges, reflecting on the last match, last training session, and then figure out a positive plan of action for the next. Done right then it either maintains your energy or restores your energy to go again.

A few white lies such as ‘we were unlucky’, ‘the ref had a bad game’ always help, but then you need to quickly reflect on your own performance as a coach and as a team. Take ownership.

I always ask the boys and girls firstly what went well and then what could we improve. From that we find positives. I’ll always highlight things that EACH and EVERY kid did well, so that they can leave with their head held higher than it might otherwise. I’ll try to involve the parents to ensure the messages are clear and supported more widely, and to try to make sure by the time the kid gets in the car to go home they have all heard some positives, even if we were beaten badly.

The good thing about kids is that they quickly move on – much more so than adults. So, it’s more important that myself, other coaches and the parents lift their heads up at least in the kids’ presence!

Of course, the kids individually can go up and down in mood. This is where individual coaching is much more relevant than team morale. One negative player can bring the whole group down. Therefore, treating each player as individually as possible is critical. I also try to make sure I am aligned with the parent(s) of that specific child as much as possible so I understand a little more of the influences on them from home, and therefore how I can tailor my coaching accordingly.

How do you ensure your coaching is the best it can be?

I watch tons of other coaches in action, often stealing their ideas, and learning from their style. I read, and listen to copious amounts of books related to coaching, and watch tons of videos/films of the same.

I try out coaching techniques in smaller groups or at home with my kids, and I experiment constantly to see what works and what doesn’t, knowing full well that kids get bored very quickly.

I also take feedback from the kids and their parents, so that I can learn, even if the feedback is upsetting! Recently we’ve created a small sub-group from the squad to represent the B team so that we can help develop training ideas together.

All that aside, when time permits I take courses in football coaching, and try to expand my thinking into other forms of football such as futsal, and panna/street football. In any areas where I feel I can’t add value I collaborate with other organisations and coaches to coach the squad in particular areas. In that way the team can learn from new voices and new streams of ideas. Ideally if those coaches are more diverse in age/gender/background the kids will develop in a more rounded way.

What would your advice be for anyone wanting to become a volunteer coach?

Just do it! Of course, think about it first, speak to others who coach, and recognise that one hour of direct coaching time requires at least an additional two hours for preparation, planning and reflection.

Make sure too that you are doing it for the right reasons. If you are coaching just to ensure your son or daughter gets picked for the A team then that’s totally the wrong reason.

What do you think makes an exceptional player?

Whilst I don’t have much experience in elite talent/performance , from my coaching experience observing the players who have improved the most in my squads, and the traits they demonstrate, I’d say:

I’d also say that for the age group I coach (12-13 years), physical development is a distinct advantage. I’m very conscious of that. It’s therefore important to ensure those less developed physically don’t get put off.

Players need to use any obvious physical disadvantage to develop greater levels of skill to out-smart the bigger boys/girls. Equally the bigger/stronger athletes need to ensure they don’t rest on their laurels, such that when physical size evens out more they don’t lose their advantage completely.

I’m a very big believer in hard work. So, when anyone bemoans their disadvantages/ shortcomings my natural response is to encourage them to redouble their efforts, in a smart way. That’s how a coach can particularly add value. The kids who can’t be bothered, and who aren’t supported at home may struggle in training. My role is to not let that become a big issue for the group, finding ways to develop that boy/girl so that they can compensate for their perceived and actual constraints.

What are the key things you want to teach your players?

I realise, much more so now than when I first started football coaching, that these are young men and women who are finding their way in life. I just want to be a good influence on them so that I can, in some very small way, be a part of their future success as adults. I want them to be ambitious, confident, competitive, humble, active, unselfish, supportive, fair and fulfilled adults.

What impact have your previous coaches had on you?

I remember the coaches that gave me confidence. I recall a cricket coach, Mr McDonald, who had so much faith in me, he developed me far more than any other succession of coaches, before or after.

It’s an important lesson to me, that belief in others, particularly when you are in a position of influence, is so important.  I responded to Mr McDonald’s coaching, however challenging, in a much more committed way because I knew he had my back. I took his constructive criticism much better as a result and pushed myself harder. His praise meant so much to me too. It filled me with pride and 30+ years on, many memorable experiences.

Something I remember seeing recently is the ex. Arsenal footballer Ian Wright having a surprise visit by one of his former school teachers some 30 years on. The look of shock on Ian’s face was incredible (partly because Ian assumed the teacher was dead!). Ian took his cap off and respectfully referred to the former teacher as Mr Pigden (as if he was still his pupil). Then the tears flowed as Ian recounted the sheer faith that this humble teacher bestowed upon Ian, and the positive impact it had had until this very day. He described the teacher as the first influential male figure on his life. Someone that was ‘so supportive’. It was a lovely moment. That’s the power a coach can have on a teenager.

A big thank you to Tony Page (pictured left) for sharing his experiences and coaching insights with us.

Tony’s experiences are a wonderful example of the power of coaching – how it can shape and inspire players and open up new passions and talents players didn’t know they had.