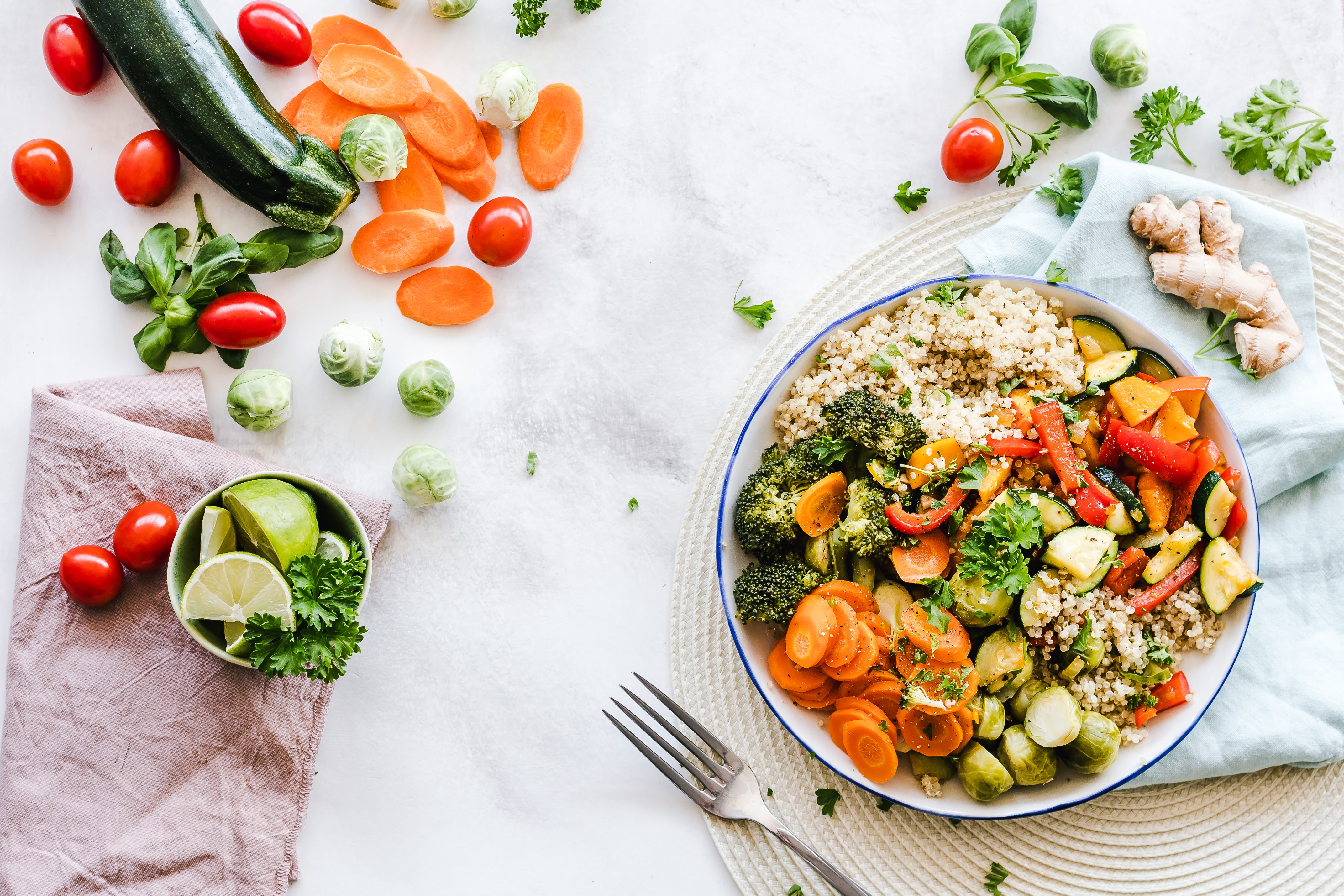 Every athlete knows that physical training alone won’t get them to where they want to be. An athlete’s performance is determined by a number of factors, with nutrition being key. But with so much conflicting information out there about what athletes should or shouldn’t do when it comes to nutrition, we felt it was time to provide the facts.

In this post we address 6 sports nutrition questions adapted from Advanced Sports Nutrition, so you can maximise your potential as an athlete.

Question 1: As an athlete, is it true that protein is the most important macronutrient for me to consume?

There is no hierarchy of importance in the energy substrates; all are critically important and fulfill necessary biological functions. However, there is a common belief among athletes that the consumption of protein is critical to athletic success, often to the detriment of carbohydrate and fat. As a consequence of the overemphasis on protein, the inadequate consumption of carbohydrate appears to be the most likely to result in poor performance.

Only a limited amount of carbohydrate is stored as glycogen in the liver (responsible for sustaining blood sugar) and muscles (needed for aerobic and anaerobic metabolism and for the complete energy metabolism of fats). Although endurance activities rely heavily on fat as an energy substrate, the fact that these activities go for long periods of time diminish glycogen stores, which, once depleted, cause the endurance athlete to “hit the wall.”

Power and speed activities, on the other hand, are heavily reliant on anaerobic metabolism, which is highly carbohydrate dependent. As a result, the power athlete with insufficient glycogen stores is likely to have an early performance failure. Though frequently overlooked among athletic groups, carbohydrate intake is a critically important substrate for assuring optimal performance. Athletes must learn how to enhance glycogen storage and avoid glycogen depletion by consuming the right kinds of carbohydrates, in the right amounts, and at the right times.

The table below outlines the functions of each energy substrate:

The human system is remarkably capable of making and storing fat. Excess consumption of fat, carbohydrate, or protein all result in higher fat storage. It is important to remember that carbohydrates come in many forms, including fresh fruits and vegetables, whole grains, and refined grains and sugars. Refined carbohydrates (sugars and highly processed grains) are highly capable of causing a rapid rise in insulin, which quickly moves sugar from the blood to inside cells.

The form of the carbohydrate is important. Consider that consumption of fresh fruits and vegetables (both carbohydrate sources) are associated with lower risk of developing type 2 diabetes, which is associated with high body-fat levels. If high levels of sugar are consumed, then the insulin response is even higher and more rapid. In this condition, cells are incapable of processing all the sugar that has entered the cell and converts the sugar to fat, which is stored for later metabolic use. This high insulin response to sugars and refined grains is one of the reasons that carbohydrate intake is associated with higher body-fat levels.

It is important to consider, however, several other factors that can elevate the insulin response and cause a person to become fatter.

Question 3: How much carbohydrate should an athlete consume?

Recommended carbohydrate consumption varies by the type of activity an athlete is involved in, ranging from 3 to 5 g/kg/day for light activity to 8 to 12 g/kg/day for high-intensity activity. To put this into perspective, the recommended maximal intake for protein is just 2 g/kg/day.

Athletes should consider the timing of carbohydrate intake as an important factor in optimizing glycogen stores. In particular, the immediate postexercise period is characterized by elevated glycogen synthase, which serves to efficiently convert consumed carbohydrate to glycogen. Taking advantage of this elevation in postexercise glycogen synthase is an important recovery strategy, and is especially important for athletes who work out more than once per day or train on sequential days.

Question 4: Is fat something that I should avoid eating?

As discussed previously, fat is an important energy substrate—by no means should athletes avoid eating fats. However, athletes should also be cautious of eating too much fat to avoid the potential for inflammation, particularly from saturated fats, trans fatty acids, and omega-6 fatty acids. Athletes following a ketogenic diet (high fat, high protein, and low carbohydrate) are not likely to experience a performance benefit and may well increase dehydration risk, with an elevated risk of kidney damage should chronic dehydration occur. It is generally recommended that healthy fats (mono- and polyunsaturated with an emphasis on omega-3 sources) constitute about 25 percent of total energy consumed. Athletes with extremely high energy needs (e.g., cyclists, long-distance cross-country skiers) can consume up to 35 percent of total energy from fat. Consider that many athletes consume more than 35 percent of total calories from fat, which is a concern because this naturally diminishes the energy being derived from carbohydrate and protein.

As with all nutrients, limiting large single doses by striving for moderate per-meal intakes enhances fat tolerance. It is also important to consider that having a relatively high-fat meal before exercise results in a delayed gastric emptying that could result in GI discomfort and inadequate fluid consumption during exercise. Getting fats to a desired level typically involves avoidance of fried foods, fatty meats, and fat-based sauces.

Question 5: What is the best protein an athlete can consume?

One of the best biological sources of protein is whey protein because it has an excellent distribution of the essential amino acids and is slightly elevated in the amino acid leucine, which is known to stimulate muscle protein synthesis and aids in muscle repair and recovery. However, these well-established benefits may cause athletes to consume excessive amounts, resulting in the opposite of the desired effect.

To avoid this difficulty, whey protein intake should not exceed 120 calories (30 g) per consumption opportunity. There are an increasing number of studies that show that chocolate milk consumption, a source of whey protein, is beneficial as a postexercise recovery beverage. Chocolate milk has multiple characteristics that are useful postexercise, including a good electrolyte concentration, good-quality protein, carbohydrate (sugar), and chocolate. The chocolate contains a methylxanthine that is a vasodilator, enhancing the delivery of nutrients to cells and enabling improved removal of metabolic by-products.

As with all protein consumption, the quality and total amounts that should be consumed are only two of the issues to consider. It is also important to consider the per-dose amount, the other nutrients and food components it is consumed with, and the state of energy balance to acquire the optimal benefit.

Question 6: How does an athlete know how much protein they should consume?

The current recommendation for protein intake is 1.2 to 2.0 grams per kilogram of body mass. The amount varies by several factors, including protein quality, type of activity, relative lean mass, the need to enlarge the muscle mass, injury repair, and age. Assuming the athlete is in a reasonably good state of energy balance (i.e., ± 300 to 400 kcal), it appears the maximal amount of protein that can be used anabolically (to build and repair tissues, synthesize hormones and enzymes, etc.) is approximately 2.0 grams per kilogram. Amounts greater than this are likely to be used to help satisfy the athlete’s energy requirement, but will result in greater risk of dehydration.

The amount consumed in a single meal is also an important consideration, because protein amounts exceeding 25 to 30 grams at once will result in the excess being used as energy rather than anabolically. An easy way to calculate protein intake and distribution is to calculate the athlete’s weight in kilograms, multiply by 2 to determine the maximal recommended protein amount, and divide by 25 to determine the number of meals needed to optimally distribute the required protein.

This meal distribution is also a good way to sustain blood sugar to avoid the potential for a hyperinsulinemic eating response.