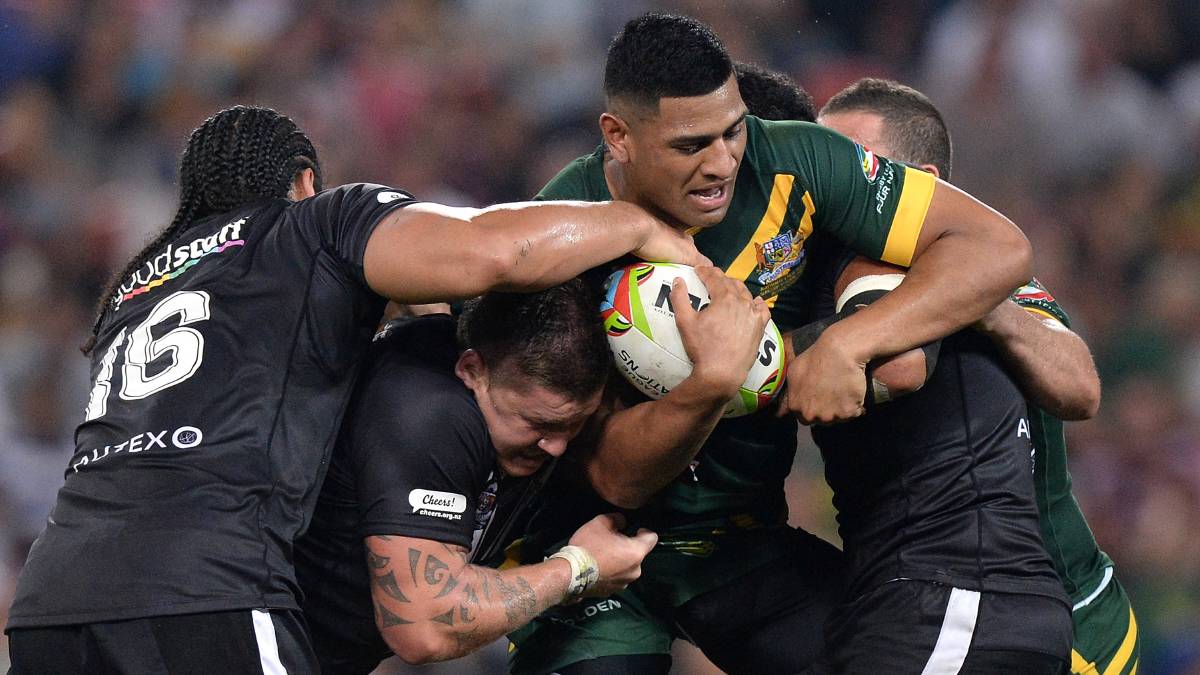 With the exciting news that England has just been selected to host the 2021 Rugby League World Cup. Now is an excellent time to get into some great international Rugby League.

This fast-paced, tough tackling sport is most popular in Yorkshire/Lancashire, UK and the Australasia continent.  Many people not living anywhere near the M62 or Sydney are often confused by Rugby League.

Well, here is a rough guide.

The aim of Rugby League is to simply score more points than your opponents.

Points are scored by scoring tries. You score tries (worth four points) by touching the ball down over your opponent’s try line. You can convert that to six by kicking a goal. The other means of scoring are a penalty goal (also worth two points) and a drop goal (worth one point).

Players, positions and the length of a game

There are two teams of 13 players with four reserves on the interchange bench. Each team can make a maximum of 12 changes involving any combination of players. Rugby League players have to be multi-skilled but some players do focus on roles/positions within their teams including carrying the ball into the opposition line (forwards), attacking the fringes (backs) and distributing the ball (hooker and half backs). All players work together in their team’s defensive formation.

A Rugby League match lasts for 80 minutes (two 40 minute halves). Timekeepers monitor this and sound a siren or hooter as a signal to the ref when the game is over. The game doesn’t actually stop until the ball goes dead (out of play) after the hooter – often ending in grandstand finishes!

Rugby League is known for being exciting to watch, the ball is in play far more than other sports such as Rugby Union and American Football. There aren’t too many rules and set pieces are few and far between, all of which allows for a free-flowing, frenetic game. Rugby League players are arguably some of the fittest athletes to play any sport, especially from a strength and conditioning point of view.

The ball has to be passed backwards. It can be passed as many times as you like until a player is tackled in possession. The ball carrier who was tackled then gets up and rolls the ball back to a teammate for the next set of play.

Each team has the ball for six plays (or tackles). After the six plays are completed the team in possession must handover the ball to the opposition. Most teams elect to kick on the fifth tackle in order to gain as much ground as possible and avoiding the handover.

Six players form a scrum. They are a means of re-starting the game and create a good opportunity to attack. Scrums are awarded for knock-ons (knocking the ball forward), forward passes or sometimes if the game is too dangerous to continue.

There will also be a scrum if the ball goes out of play.

Touch is found when a player kicks the ball, which has bounced in the field of play, before going over the touchline. This can be done to gain a more advantageous field position.

A scrum will take place opposite to where the ball went out of play, 20 metres inside the pitch from the touchline.

The advantage is with the other team who didn’t kick the ball in to touch because they get the put-in at the scrum.

If the ball goes out on the full, then a scrum will take place from where the kick was taken.

There is a rule called 40-20 kick, this is a fairly new rule and rewards a good kick so the advantage isn’t with the opposing team. A 40-20 kick is when a player kicks the ball behind his own 40-metre line and it bounces into touch within the opposition’s 20-metre line. If this happens the side that kicked the ball get the advantage of putting the ball into the resulting scrum. A goal line ‘drop out’ is taken from under your own posts if you have been forced to touch the ball down in your own in-goal area or put the ball out of play in this area.

Can you be offside?

Yes, you are offside in Rugby League if you are within the gap maintained between the attacking and defensive sides between tackles/plays or if you interfere with play after being in front of a team mate when they have kicked the ball in open play.

In Europe, there is one full professional league – The European Super League. This league is made up of 12 teams, 11 from England (6 from Lancashire, 5 from Yorkshire) and one from France. The 2017 campaign which starts again in February.

The league below the Super League is called the Championship.

The structure of Rugby League changed in 2015 bringing back promotion and relegation, however, this isn’t as straightforward as the bottom team in the Super League goes down to the Championship to be replaced by the winner of that league, no this is far more exciting/cruel some may say.

In the Super League and the Championship (which also has 12 teams, comprised of 11 English teams and one from France, most of which are made up of semi-professional players) all teams play each other twice, home and away, plus the magic weekend where all the teams in the Super League play each other in one venue (St James’ Park for 2017) over one weekend. After 22 games both leagues split, creating three leagues of eight teams based upon league position. The top eight of the Super League keep their accrued points and all play each other one more time to battle it out for a top-four finish, then the winner of the Super League plays the team that finished 4th; and 2nd play 3rd in a semi-final, the winners then meet in the Grand Final. Wigan Warriors are the current champions, winning their 4th title in 2016 (celebrating in the image above).

The teams finishing 5th – 8th finish the season disappointed to miss out on the final playoffs but safe in the knowledge that they will be back in the Super League next season.

All these teams play each other once, after seven rounds, the top three in the qualifiers automatically secure a Super League spot for next season, with the sides lying fourth and fifth facing each other in a one-off play-off match – the Million Pound Game – to determine next year’s final Super League team. This year’s Million Pound Game was between Hull KR and Salford, Salford won by one point in extra time in a nail biting, career threating affair. Hull KR and Salford were both in the Super League last season and Hull KR are the first team to be relegated since the introduction of the qualifiers. Leigh Centurions took their place, finishing in the top three in the qualifiers.

Check out some of our books that will help Rugby League players of all abilities.