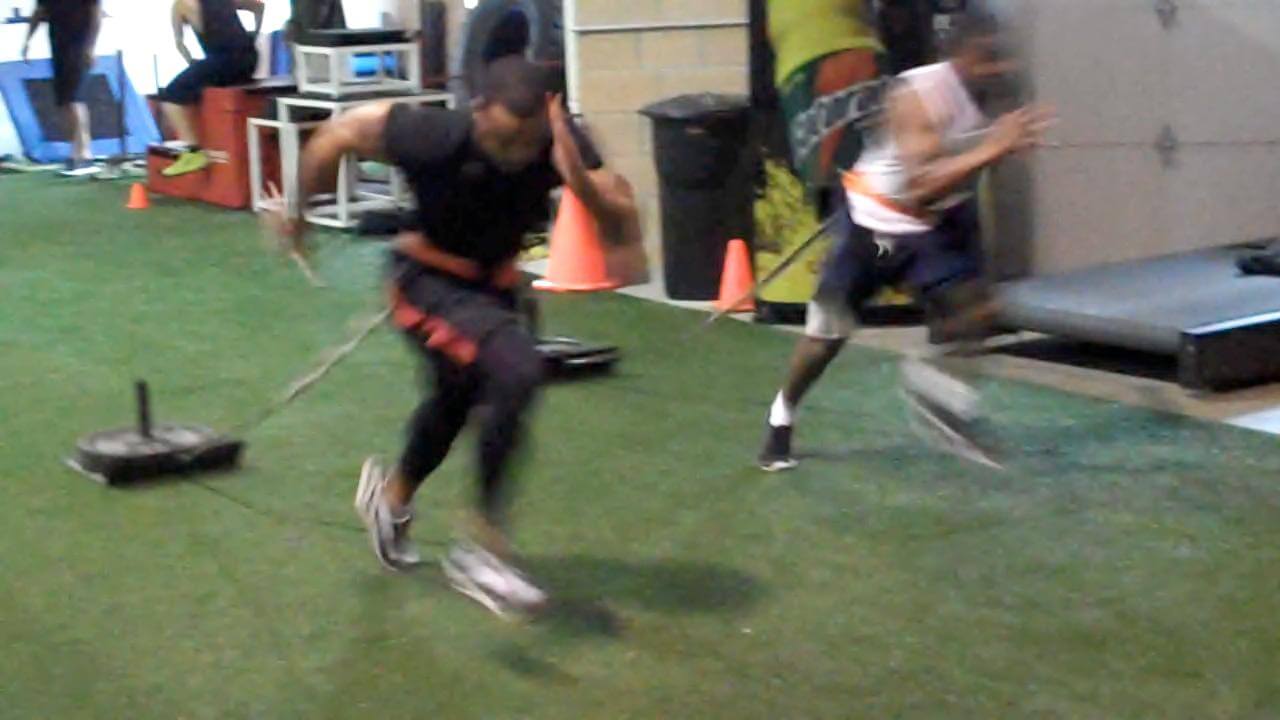 Does sled towing actually improve sprint speed and if so what is the optimum overload for the highest power output without harming running technique?

As gyms become more functional we are seeing more sleds on the gym floor. They’re often used by athletes to improve acceleration and speed but do you have any idea what is the optimum weight you should be pulling to actually improve speed?

A recent study published in the International Journal of Sports Physiology and Performance titled Sled Towing: The Optimal Overload for Peak Power Production investigated the effects of different loads on kinematic and kinetic variables during sled towing. The authors, of the study, Andrea Monte, Francesca Nardello and Paola Zamparo are with the Dept of Neuroscience, Biomedicine and Movement Sciences, University of Verona, Italy.

Thirteen male sprint athletes aged between 18 and 23 years old participated in this study. Their 100-m personal bests ranged from 10.66–11.11.

To be recruited, each athlete had to have at least two years of experience with sled towing sprinting and be free from any type of injury. The athletes had to abstain from training in the 48 hours before the test session. All thirteen of the athletes train between three and six times a week on a regular basis.

Once the athletes had done a standard 20-minute warm-up (ie, running, specific gaits and dynamic stretching) they performed two submaximal sprints with the sled and then got into the tests. These were performed in an indoor gym (20°C and 60% humidity).

All the athletes performed five maximal trials over a 20-meter distance. The athletes pulled a variety of weights, from unloaded to loads from 15% to 40% of the athlete’s body mass (BM). At least eight minutes of recovery were observed between trials. In the unloaded (UL) trial the subjects ran at their maximal speed without the sled. In the loaded conditions they were asked to run as fast as possible with an additional mass on the sled corresponding to 15%, 20%, 30% and 40% of their BM.

In the calculations, the sled mass and friction were taken into account. Contact and flight times, stride length, horizontal hip velocity (vh) and relative angles of hip, knee and ankle (at touchdown and takeoff) were measured step by step. In addition, the horizontal force (Fh) and power (Ph) and maximal force (Fh0) and power (Ph0) were all calculated.

The main results of this study indicate that sled towing sprinting affects all sprint parameters during the acceleration phase. Indeed, significant differences do exist at different loads in both spatiotemporal parameters and lower-limb angles. The main finding of this study, however, is that Ph0 in male sprint athletes reaches its maximal value at +20%BM and that, up to this load, no significant changes are observed in the angular parameters (e.g. in running technique).

On average, for all steps, all spatiotemporal parameters changed significantly with external load. From unloaded to +40%BM, velocity decreased by 20.2%, contact time increased by 19.0% and flight time and stride length decreased by 19.3% and 14.8%, respectively. The differences between loads were significant in all parameters, however nothing significant in contact time and flight time from unloaded to when the sled was just loaded with 15%BM.

All spatiotemporal variables changed when step number increased. Contact time decreased in all load conditions (–40% from the first to the last step). Flight time and stride length increased after the initial acceleration. Horizontal hip velocity increased by 113.3% fro the first step to the last.

For all steps, all kinetic variables changed significantly with external load. Ph decreased by 14.9% while Fh increased by 3.7% (from UL to +40%BM). The
changes in Fh were mainly due to differences between UL and the loaded conditions; as indicated by the post hoc tests, no differences in Fh were observed between +15%, +20%, +30%, and +40%BM.

Angular parameters are especially important for athletes who want to become stronger at sprinting without losing form. A loss of form and technique will lead to a less effective and efficient run.

On average, for all loads, angular parameters showed significant differences as a function of the step number at both takeoff and touchdown (main effect P < .01); hip angle, knee angle, ankle angle all increased when step number increased in all load conditions. Post hoc tests revealed no differences for knee angle between the fifth and the tenth steps compared with the last during takeoff. Furthermore, no differences were observed for ankle angle at the tenth step compared with the last in both running phases.

For further in-depth data check out Sled Towing: The Optimal Overload for Peak Power Production. The journal has a variety of graphs and tables that make the results readable and easy to follow.

This study shows how sled towing sprinting affects kinematic, kinetic and angular parameters during the acceleration phase of a 20-m sprint as a function of the load and of the running step.

Horizontal power output is an important determinant for sprinting ability and these findings show that adding 20% of your body mass to a sled is optimal. In addition, no changes in joint angles were observed up to this load, indicating that the load is not detrimental to running technique.

For more information on power/sprint training take a look at:

How shock plyometrics can make you more explosive.

The Effect of Ego Depletion on Sprint Start Reaction Time

Tissue Oxygenation in Men and Women During Repeated-Sprint Exercise