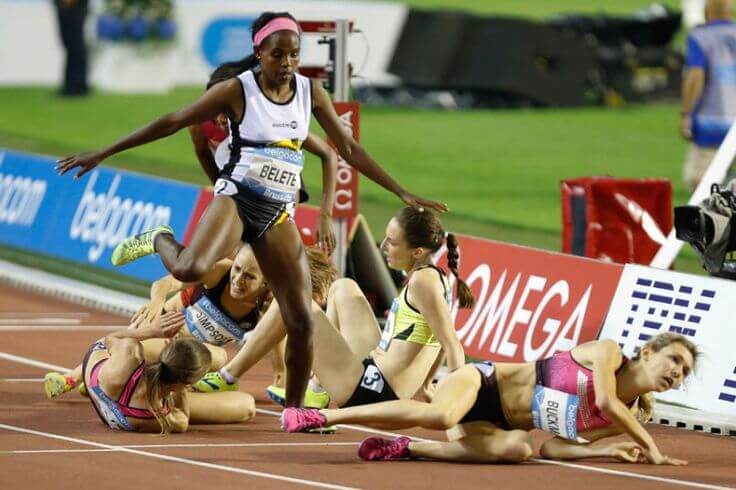 Good fundamentals of posture and balance are essential for the efficient performance of both simple daily tasks and more complex athletic movement patterns. Improper posture and loss of balance can result in poor sports performance, injury or even death.

Taken from chapter 7 of our new book Dynamic Human Anatomy, 2nd Edition. This post analyses different types of and the fundamentals of posture and balance.

Posture can be defined simply as the alignment, or position, of the body and its parts. Or more expansively as “a position or attitude of the body, the relative arrangement of body parts for a specific activity or a characteristic manner of bearing one’s body” (Smith, Weiss, & Lehmkuhl, 1996,). Clearly, these definitions are not restricted to a single alignment, or posture, but rather suggest an infinite number of possible postures. One might assume, for example, a standing, sitting or lying posture, or some other distinctive posture appropriate for a particular purpose or task.

To maintain a particular posture or change from one posture to another requires control of the body’s alignment. This control of posture is termed balance. Balance can be defined as the maintenance of postural stability or equilibrium and is often used synonymously with the term postural control.

The concepts of posture and balance, although distinct from one another, are critically interdependent. Static postures are often difficult to maintain because the body and its parts continuously respond to forces (e.g., gravity, muscle) that tend to alter body alignment and disrupt the static equilibrium of the system. The body must continuously make subtle adjustments, usually through muscle actions, to maintain the equilibrium necessary for postural stability.

Functions of Posture and Balance

Posture and balance are obviously essential for all the tasks we perform. Improper posture or loss of balance can negatively affect performance, decrease movement efficiency and increase the risk of injury. Proper posture serves three functions:

Posture should not be considered a static phenomenon. Even while people stand or sit still, there are inevitable small fluctuations in their positions or posture. Postural positions are maintained within ranges of movement. For a guard at Buckingham Palace, whose intent is to remain perfectly still, these fluctuations are imperceptible; for someone waiting in line to purchase a movie ticket, the movements are considerably greater. Thus, the posture from one moment to the next can involve varying amounts of movement, referred to as postural sway. Control of postural sway is maintained by muscle action.

Most of us have been receiving postural advice since childhood. Parents admonish their children to stand up straight and pull their shoulders back. Teachers advise their students to sit tall and tell them not to lean back in their chairs. These admonitions try to persuade us to maintain good posture. They also suggest several different types of posture.

Many of our waking hours are spent either standing or sitting. Because these postures typically involve little movement, we refer to them as static postures. While resting or sleeping, we usually assume some type of static lying posture. Note that static postures are not completely motionless. Stationary, or static, postures typically involve slight movement or swaying. Therefore, they are sometimes also referred to as steady-state postures.

The notion of a normal posture might erroneously be interpreted as meaning there is a single best posture. Given the variability in anatomical structure and physiological function, no single posture is recommended for everyone. The normal posture for individuals depends on many factors, including their body type, joint structure and muscular strength. Despite these inherent interindividual differences, certain characteristics are associated with good upright posture. In upright standing, these characteristics include the following:

An upright posture is uncomfortable if held for an extended period. Most people who must stand for prolonged periods adopt various alternative, and more comfortable, postures (Houglum & Bertoti, 2012). One alternative posture is asymmetric standing, characterised by a weight shift to one leg that is fully extended. By fully extending the knee, the line of gravity passes anterior to the knee joint, creating an extensor moment and reducing the need for quadriceps muscle activity.

Another alternative posture adopts a wide base of support with both legs fully extended and arms held behind the back or crossed on the chest. A third alternative is the nilotic stance, in which the individual stands on one leg with the opposite leg used to brace the standing knee (i.e., like a flamingo).

Perhaps the most familiar example of standing absolutely still for extended periods of time is provided by the Royal Guards at Buckingham Palace. They stand motionless for 2 hours per shift. The Guards’ performance, impressive as it is, pales in comparison to the record for unaided prolonged standing. That record is held by Akshinthala Seshu Babu (India), who, in 2003, stood motionless for an amazing 30 hours and 12 minutes. In 2015, Babu attempted to break his own record. He stood still for a total of 35 hours, 22 minutes. However, his still posture was interrupted briefly because of an insect bite. Thus, Babu’s 2003 record still stands (pun intended).

Many people spend long hours in a sitting, or seated, position, whether at home, work or school. Correct sitting postures can reduce spinal loading and the chance of injury. Incorrect postures, in contrast, can increase the risk of injury. Historically, an ideal sitting posture has been characterised by the ischial tuberosities acting as the major base of support, anterior pelvic tilt (which maintains appropriate lumbar curvature), spinal support provided by a slightly inclined seat back and the feet contacting the floor to share in supporting the body’s weight.

Poor sitting posture, usually characterised by a slouched position, results in posterior pelvic tilt (which flexes the lumbar spine and reduces the lumbar curvature), increased stretching and weakening of the posterior annulus fibrosis, and increased flexor torque created by an anterior shift in the line of gravity (Neumann, 2016). All these characteristics may increase the chance of lumbar disc injury and low back pain. A slouched posture also affects more than just the lumbar region. Increased lumbar flexion contributes to excessive flexion (kyphosis) in the thoracic spine and a protracted, or thrust-forward, head. This head position puts added stress on the vertebrae, muscles and ligaments of the neck and shoulders.

To read more about a pelvic tilt and how to fix it, check out our recent post by Jane Johnson.

Certain jobs require workers to sit for extended periods of time. Transit from one place to another can involve extensive sitting. And many people, by choice, sit for long stretches watching television, reading or doing nothing much at all. While sitting for short periods can, of course, be relaxing, prolonged sitting can have harmful effects. Among the many documented effects are varicose veins, weakened muscles, postural dysfunction, sore neck and shoulders, shortened life expectancy and increased risk of heart disease, diabetes and certain cancers (Zhu & Owen, 2017).

The solution? Break up long periods of sitting with intermittent standing and stretching, work while standing instead of sitting, or vary sitting posture. But even that may not be enough. Studies have shown that even regular exercise may not be sufficient to counteract the negative effects of prolonged sitting. For example, in a study of more than 200,000 adults, van der Ploeg and colleagues concluded that “prolonged sitting is a risk factor for all-cause mortality, independent of physical activity. Public health programmes should focus on reducing sitting time in addition to increasing physical activity levels” (2012, p. 494).

The notion that an ideal sitting posture exists has been challenged. McGill (2016) convincingly argues that one of the greatest risks for low back pain is the prolonged nature of sitting, which increases the risk of disc herniation. Low back health is facilitated by properly using an ergonomic chair to facilitate frequent changes in sitting posture, periodically getting out of the chair and assuming a relaxed standing position, and performing an exercise routine at some time during the workday, preferably not in the early morning when the back is more susceptible to injury.

When resting or sleeping, we normally assume a recumbent, or lying, posture because it is the least physiologically demanding. This posture rotates the action of gravity from its longitudinal orientation in standing and sitting to a transverse direction relative to the long axis of the body. Basic lying postures include lying facedown (prone), lying face up (supine) and lying on one side or the other. Each of these lying postures has advantages and disadvantages.

Surface characteristics play an important role in spinal alignment and how forces are applied to the body. On a very hard surface, only specific body areas (e.g., hip, shoulder) come in contact with the surface. This creates localized pressure points that can be uncomfortable or even injurious. Sleeping on too soft a surface also can cause problems, including excessive lumbar flexion when in a supine position, exaggerated lumbar extension in a prone posture, and lateral spinal curvatures when side lying (figure 7.5b). The surface and head support (e.g., pillow) should be consistent with maintaining proper spinal alignment.

Inside the book, you will find examples of these postures.

Dynamic posture is the posture of motion, as seen in walking, running, jumping, throwing and kicking. Each of these movements requires continual changes in the position of the trunk and extremities that must be controlled to maintain the dynamic equilibrium necessary for task completion. Loss of dynamic postural control can result in task failure (e.g., stumbling or falling) and possible injury.

For more information on types and mechanisms of postural control as well as postural alterations and perturbations check out the rest of chapter seven in our new book Dynamic Human Anatomy, 2nd Edition.

Fundamentals of Posture and Balance in Infants

Postural development in an infant begins with control of the head and proceeds to the trunk. Automatic postural reactions, summarised in the table below, develop during the first year of life. Also within the first year of life, an infant reaches postural milestones of sitting and standing and begins developing the balance strategies required for postural control.

Clearly, during this first year, infants respond to environmental cues in what is termed perception-action coupling. An infant perceives optical flow (i.e., visual image changes due to motion) and coordinates this information to generate postural responses. Infants scale their postural responses to the visual information they receive.

In the first few years of development, an infant reaches numerous posturally related motor milestones. According to the Bayley Scales of Infant Development, these include:

The order of these milestones is relatively consistent, with each skill building on earlier ones, but there is a wide age range at which different children reach each milestone. In addition, other scales (e.g., Shirley Sequence) may list somewhat different average ages for each milestone (Haywood & Getchell, 2014).

Balance continually improves through infancy and childhood, but the exact course of the improvement depends on the task. Perception-action coupling must be developed and refined for each new skill, and although the general trend moves toward improved balance, plateaus or even decrements in balance performance may occur along the way (Haywood & Getchell, 2014).

Dynamic Human Anatomy, 2nd Edition also talks about pushing the limits of balance as well as balance for the elderly, of which balance is incredibly important.