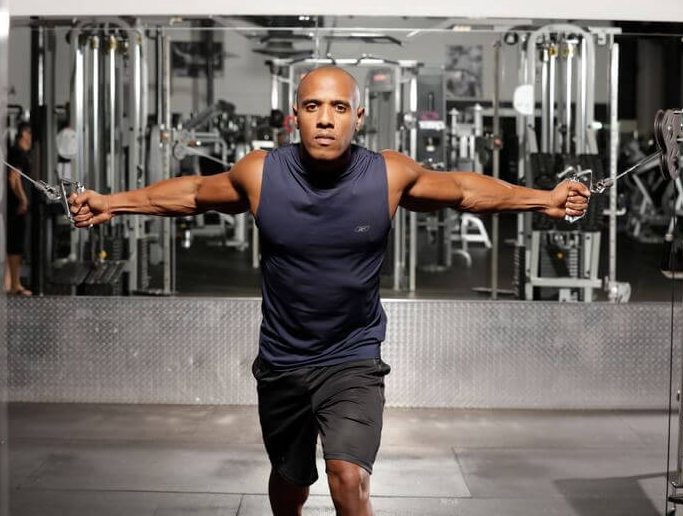 Is it better to train using free weights or machines? It’s a common question, we’ve scoured our resources to find the most evidence-based answer.

Firstly, when looking at machines there are two types, fixed-form and free-form, what is the difference? To answer this question we first turned to our brand new book Advanced Fitness Assessment, 8th edition.

Chapter seven of the book, ‘Designing Resistance Training Programs‘ has a section on ‘common questions’. The authors state that both fixed-form and free-form resistance exercise machines may be used to improve muscular fitness.

Fixed-form devices limit the range of motion and plane of motion during the resistance exercise. As you can see from the image below of the female trainer on the leg extension. In contrast, free-form exercise machines allow movement in multiple planes (e.g., cable machines).

Which is better? Free weights or machines?

In Brad Schoenfeld’s Science and Development of Muscle Hypertrophy he states that once people have learned the movement patterns of basic resistance training exercises, they should use a variety of exercises to maximise whole-body muscle hypertrophy. This should include a variety of free-form (cables and free weights) as well as machine-based exercises. Similarly, both multi- and single-joint exercises should be included in hypertrophy-specific routines to maximise muscular growth.

Many people say that machines aren’t functional, Brad debunks this.

As a general rule, simply getting stronger improves functional capacity.

Free weights, cable pulleys, machines, and pretty much any other resistance implement will help to improve strength.

Take home: They all can be “functional”

Brad also recently posted about this on his Instagram page.

I recently followed Brad’s Linear Periodised Programme for Loading and found that machines surprised me. I have always been a fan of big compound lifts and functional movement. These lifts were still part of the programme but I found that by reintroducing machines to my workouts I got some added gains.

The whole idea of pitting free weights against machines is like pitting fruits against vegetables.

Nick Tumminello, who is in the personal trainer hall of fame writes in his book Your Workout Perfected; The whole idea of pitting free weights against machines is like pitting fruits against vegetables. Both training modalities offer a unique benefit the other misses, so it makes sense to do them both to make your muscle-building workouts more comprehensive, just like eating both fruits and vegetables will make your diet more nourishing.

Tumminello goes on to explain that free weights excel by requiring you stabilise and control not just the load being moved but also the path of the movement. However, free weights fall short when it comes to keeping consistent mechanical tension on the working muscles throughout the range of motion involved in most exercises. That’s where machines excel and therefore offer distinct benefits for building muscle.

During any style of curl, the point at which your biceps is being maximally loaded (stimulated) is a range of motion when your forearm is at a 90-degree angle with the load vector. If you’re using free weights, gravity is your load vector. The point of maximal mechanical tension on the biceps would be when your elbow reaches 90 degrees of flexion or when your forearm is parallel to the floor. If you’re doing bicep curls using a cable machine, however, the cable itself is the load vector. The point of maximal mechanical tension to your biceps is when your forearm makes a 90-degree angle with the cable. The further away you move from a 90-degree angle in either direction of the load vector, the shorter the lever arm and the less work your biceps have to do; therefore, your biceps experience less mechanical tension. That’s why, in a free-weight biceps curl, the closer you move toward the bottom or top of the range of motion, the less work your biceps do.

Jim Stoppani, who has won numerous awards for his groundbreaking research and trained many iconic celebrities such as Dr Dre and Dwayne “The Rock” Johnson. Writes in his book Jim Stoppani’s Encyclopedia of Muscle & Strength, 2nd edition;

Although evidence that varying exercises enhance muscle activation is compelling, Brad Schoenfeld’ the 2018 NSCA Outstanding Young Investigator of the Year explains in the book Science and Development of Muscle Hypertrophy that the extent to which selective activation of a given portion of a muscle enhances its site-specific strength/hypertrophic response remains to be determined. A large body of research shows that muscle hypertrophy occurs in a non-uniform fashion, in terms of preferential growth of both individual muscles in a muscle group and different regions within the same muscle. For example, multiple studies have shown that knee extension exercises result in a heterogeneous hypertrophic response in which certain areas of the quadriceps femoris show greater hypertrophy than others (1, 2, 3). Similar nonuniform growth has been demonstrated in the triceps brachii following regimented elbow extension exercises (4, 5).

Although the growth-related benefits of training variety are clear, the concept should not be taken to an extreme. When exercise variation occurs too frequently, a person may spend too much time developing motor skills with suboptimal loads, which compromises the hypertrophic response (7). As stated in Science and Development of Muscle Hypertrophy this is particularly important during the initial stages of training in which improvements in strength are largely related to an improved neuromuscular response. During this motor learning period, the number of exercises in a programme should be limited so that neural patterns become ingrained into the subconscious. On the other hand, trained lifters can be more liberal in varying exercise selection; their neural patterns are much more entrenched and depending on the complexity of the exercise, coordinated movements are maintained even after ong period without training. Moreover, significant transfer of training from exercise variations (i.e., back squat to front squat) facilitates the retention of neural patterns over time.

In the book Strength Training, 2nd edition the NSCA state that machines are better for beginners. Machines encourage safe form by limiting the range of motion that is needed for the exercise. The risk of injury is further reduced by built-in safety mechanisms. Machines can be used to work almost every major muscle group. Additionally, machines can be used to train isolated muscles.

Training for muscle power should be performed almost exclusively with free weight systems. Power exercises such as squats, hang cleans and snatches are difficult to perform. These should be done with proper training and supervision. These movements often require large loads and strenuous body movements. Power training is primarily used in competitive athletic environments in order to improve physical performance, although it can be utilised as a total-body workout for those with limited time and excellent technique.

A variety of exercises should be employed over the course of a periodized training programme to maximise whole-body muscle hypertrophy. This should include the liberal use of free-form exercises (i.e., free weights and cables) that maximize the contribution of stabilizer muscles, as well as machine-based movements that target specific muscles or portions thereof. Similarly, both multi- and single-joint exercises should be included in a hypertrophy-specific routine to maximise muscular growth.

So which is better free weights or machines? The answer is generally to mix it up! But not too much … For strength and hypertrophy research shows that a variety of exercises are beneficial, both with fixed machines, free-form machines and of course free weights. However don’t train randomly, focus on your goal. For more tips on programme design check out
Advanced Fitness Assessment, 8th edition.

For functionality and power, free weights are the best choice, followed by freeform machines such as cables.

Don’t be afraid to use some fixed machines, they can offer you a much more consistent resistance throughout a larger portion of the range of motion.

Fixed-motion machines might also be necessary for specific populations.

What do you prefer to train with? Let us know in the comments box.