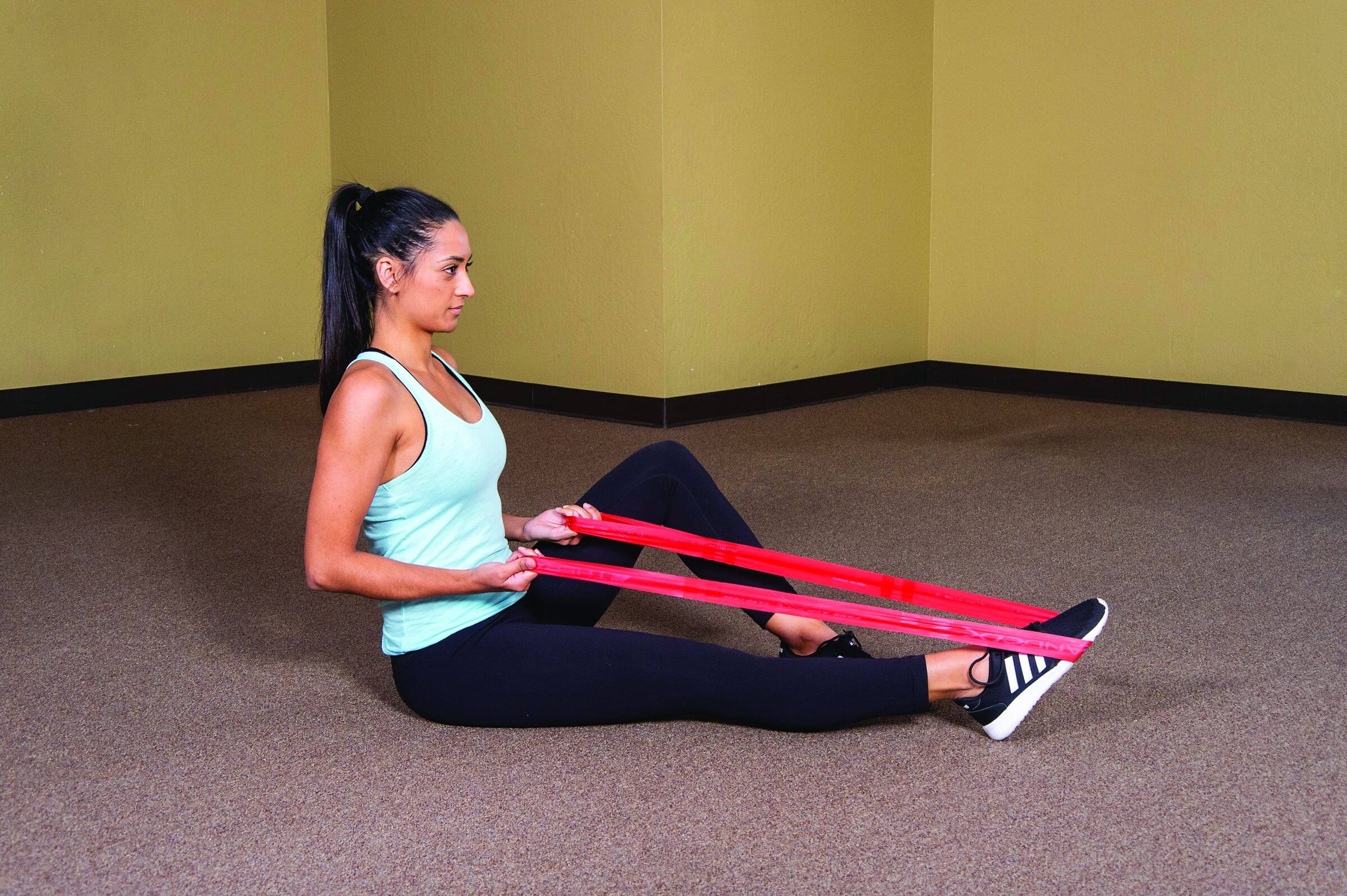 Resistance band workouts can be used to strengthen every muscle in the body. In this article, we will answer some common questions about resistance bands and give you some exercises specifically for your shoulders.

In the first part of this article, we aim to answer some the of the most frequently asked questions regarding resistance bands.

What are Resistance Bands?

Elastic resistance bands are an inexpensive, convenient and effective way of adding resistance exercises to any workout. Research has proven the effectiveness of elastic resistance training (ERT) across ages, from children to older adults, as well as from sedentary people to elite athletes.

How do Resistance Bands Work?

Resistance bands work as you stretch the elastic band, the resistance increases. This resistance provides a progressive stimulus to the muscle to build strength and help increase muscle mass. ERT allows us to exercise single or multiple joints at one time, making exercises functional and efficient.

A comprehensive resistance exercise programme can easily be performed with a single band and can be done anywhere, including at home or on the road.

What are the Benefits of Resistance Bands?

Elastic resistance with strength bands provides a full spectrum of resistance training options—from rehabilitation to wellness. They are used by a variety of individuals, young to old, beginners to elite athletes. Bands and tubing are also used for injury prevention and performance enhancement programmes. Resistance band workouts are now commonly used by certified Personal Trainer’s, S&C coaches and physiotherapists.

In our recent Twitter poll, we found that most of our followers use them for rehab.

Do you use elastic resistance bands?

How to Prevent Shoulder Injuries with Resistance Bands

In this video Todd Ellenbecker, the co-author of Strength Band Training, 3rd Edition explains some of the basic movements that should be considered in a resistance band workout to prevent injuries.

When Should Resistance Bands be Used?

Here are some examples of the types of training you can do with resistance bands.

You can learn all about these resistance band workouts in Strength Band Training, 3rd Edition.

What Exercises Can Be Done With Resistance Bands?

Many exercises can be performed with a strength band or tube. The whole body can be trained with strength bands. This is explained in Strength Band Training, 3rd Edition with many examples.

One exercise band can be used to strengthen all the major muscle groups with exercises such as a bench press, seated row, upright row, lat pull-down, leg press, knee extension or hamstring curl. Elastic resistance bands may also be used to strengthen specific muscles that cannot easily be activated muscle-specific machines, such as the rotator cuff and peroneus longus (a muscle important to ankle stability). The resistance can easily be increased (or decreased) by moving to the next colour of resistance band or tube.

Do Elite Athletes Use Resistance Bands?

Athletes from a variety of sports perform resistance band workouts. They are light, versatile and durable, especially useful when travelling. Athletes use strength training bands to add resistance and will, therefore, strengthen and condition their muscles for sport-specific functional drills.

Why Should You Use Resistance Bands?

Elastic resistance can easily be integrated into a fitness programme. Using ERT frees you from the limitations of gravity, allowing you to isolate muscles and perform the same movements in a totally different way, perhaps becoming more functionally specific as well. In addition, elastic bands can be used to perform flexibility or balance exercises, which expands the range of options for improving overall fitness. They also help you get strength gains.

How do Resistance Bands Help Recovery from Injury?

One of the benefits of elastic resistance bands is that the level of resistance can be easily changed by greater elongation of the band itself. Great care must be taken to not use too much resistance, particularly when exercising around an area that has been injured.

Phil Page and Todd Ellenbecker, the authors of Strength Band Training, 3rd Edition state that low-resistance programming coupled with higher numbers of repetitions (at least 15 reps), intended to foster and create muscular fatigue, are recommended. Additionally, use a range of motion that is not painful and do not take the joint to end ranges of motion. This can allow important muscular contractions and muscle work to be performed in an area that otherwise could not accommodate full range-of-motion exercise.

What are the Best Resistance Band Workouts?

This depends on the goal if its sports performance, if so which sport or is it for rehab or corrective training? You can also adapt the training for general fitness and aesthetics.

Here are a few recommendations for different goals. The best resistance band workouts and exercises for shoulders are explained at the bottom of this article.

All these exercises and many more are explained in Strength Band Training, 3rd Edition.

Resistance Band Exercises for Back

In this video Todd Ellenbecker, the co-author of Strength Band Training, 3rd Edition shows you how to perform shoulder training for a tennis player

Yes, resistance bands improve strength and hypertrophy. Performing a push-up with an elastic band can provide 39% more global activation of muscles and as much pectoralis activation as 70% of a maximum bench press (Calatayud et al. 2014).

In a meta-analysis, Aboodarda and colleagues (2016) noted that there was no significant difference in EMG muscle activation levels in 14 studies comparing elastic and isotonic (traditional lifts that have eccentric and concentric actions) resistance exercises. In addition, they found that elastic resistance training (ERT) enhances the activation of stabiliser muscles during exercises compared to isotonic resistance.

More research demonstrates that ERT provides as much benefit in strength gains as the use of more expensive and bulky weight-training equipment. A study by Colado and Triplett (2008) compared 10 weeks of elastic- and machine-based exercise at the same intensities. The researchers found no significant difference between the groups: both the elastic- and machine-based groups significantly increased their strength and muscle mass. Furthermore, the researchers pointed out that the elastic resistance exercisers benefited from lower cost and less space for training compared to the machine-based exercisers.

Are Resistance Bands better than Weights?

Biomechanically, elastic resistance provides the same strength curves (resistive torque) as free weights and dumbbells, providing adequate stimulus for even elite athletes (Aboodarda et al. 2013). Resistance bands allow us to exercise single or multiple joints at one time, making exercises more functional and efficient. Exercise machines and dumbbells use gravity against the weights (isotonic resistance) and often limit you to one particular exercise per machine. Elastic resistance, on the other hand, doesn’t rely on gravity; rather, its resistance depends on how much the band or tubing is stretched. In addition, elastic resistance offers innumerable exercise options. Resistance bands are generally considered safer than weights too.

Do Bodybuilders Use Resistance Bands?

The exercises and images are taken from our new book Strength Band Training, 3rd Edition.

Stand with one foot slightly in front of the other with the middle of the band or tubing under the foot. Grasp the two ends of the band and bring them around the outside of the feet (a). Lift the band out to the side at shoulder level, keeping your elbows straight (b). Slowly return to the starting position.

Keep your shoulder blades down; avoid shrugging your shoulders with the movements. Keep your abdominals tight and your wrists straight.

Use a staggered step, with one foot slightly in front of the other, and stand on the middle of the band or tubing with one foot. Grasp the ends of the band (a) and lift the band forward to shoulder height, keeping your elbows straight (b). Slowly return to the starting position.

Alternate lifting right and left arms. Perform with the palms up for more biceps activation.

Keep your shoulder blades down; avoid shrugging your shoulders with the movements. Avoid arching your back; keep it straight. Keep your abdominals tight and your wrists straight.

Alternate lifting right and left arms. Be sure to stop at shoulder height.

Keep your shoulder blades down; avoid shrugging your shoulders with the movements. Avoid arching your back; keep it straight. Keep your abdominals tight and your wrists straight.

Researchers found that performing this exercise for 2 minutes, 5 days a week for 12 weeks will significantly reduce shoulder and neck pain in office workers (Andersen et al. 2011).

Perform the exercise by placing the middle of the band around your upper back. Grasp the end of the band at shoulder level and push the band forward as you keep your elbow straight.

Don’t shrug your shoulders. Keep your elbow straight throughout the exercise. Don’t allow your trunk to rotate during the exercise.

Begin with a looped band or wrap the ends of a band around each hand. Perform the following movements against the resistance of the band with both hands:

Maintain an upright posture with a neutral neck and back.

For more resistance band exercises for shoulders and back check out Resistance Band Exercises adapted from Nick Tumminello’s Your Workout PERFECTED.

Resistance Band Workouts on the Move