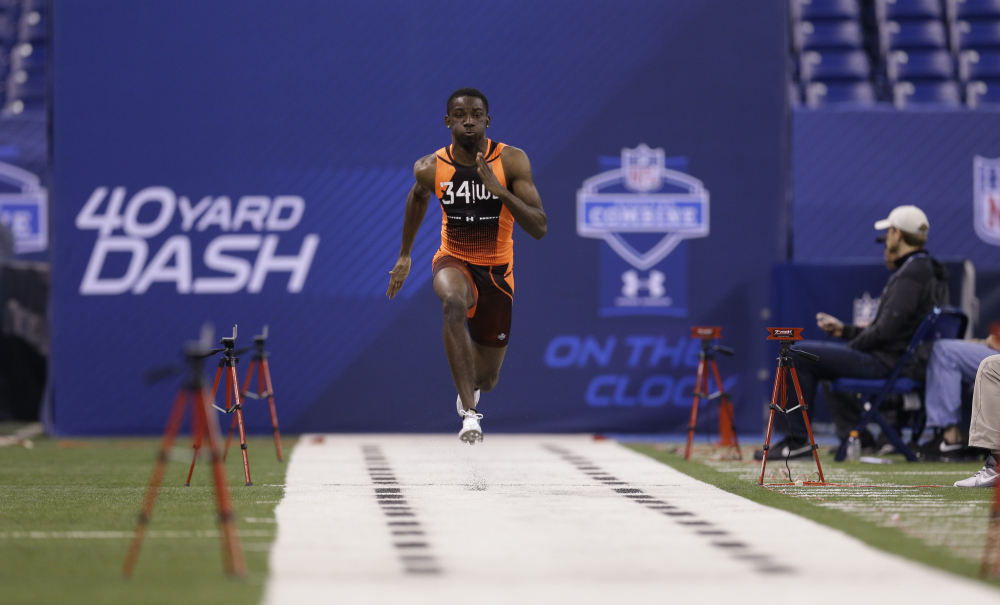 Faster, stronger, fitter: what are the limits of human performance? And just how powerful can human beings get?

In a published study from January 2008, Berthelot et al estimated that world records had reached 99% of their asymptotic values and that human upper-performance limits in sport would be reached within one generation. Only months later, Usain Bolt improved the 100m world record to 9.69s in the Beijing Summer Olympics. Followed by an even more astonishing 9.58s world record one year later and let’s be honest he could probably have gone quicker, he even had time to have a look around before crossing the finishing line. This is a world record improvement equivalent to that achieved from 1968 to 1999. Usain Bolt is undeniably one of a kind, however, this is just is one of a number of examples throughout sports history of unanticipated “quantum leaps” in performance due to physiological, biomechanical and technological advances.

Research from the International Journal of Sports Physiology and Performance defines the current “world records” in physiological capacity: human upper limits of aerobic and anaerobic power in their article New Records in Human Power.

Maximal oxygen uptake (V̇O2max) has been established as a valid and reliable measure of the maximal ability to produce metabolic power aerobically. While V̇O2max integrates cardiac output, total body hemoglobin, muscle blood flow and muscle oxygen extraction, the primary limiting factor for V̇O2max in athletes is the ability of the cardiorespiratory system to deliver oxygen to the exercising muscles.

V̇O2max is strongly correlated with endurance performance in heterogeneous groups of performers. However, the strength of this relationship generally deteriorates in homogenous subsets of elite endurance athletes, consistent with the contributing role of other factors such as fractional utilisation of V̇O2max and work economy/efficiency. High V̇O2max is necessary but not sufficient for elite endurance performance.

Today’s best endurance performers have body sizes and compositions that closely match the specific constraints of their disciplines. Based on the publically available biographical information, the three male and three female medalists at the 2014 rowing WC single sculling rowing event averaged 198 cm/98 kg and 185 cm/77 kg, respectively. In contrast, the medal-winning males and females for the 5000-m running event at the London 2012 Olympics averaged 170 cm/57 kg and 160 cm/43 kg, respectively. Elite cross-country skiers fall squarely between these extremes with gold medalist men and women averaging 182 cm/75 kg and 170 cm/60 kg, respectively. This also means that different absolute versus body mass normalised (relative) V̇O2max values are reached among the best performing athletes in these sports. It is well established that in weight supported events such as rowing and track cycling, successful athletes tend to be larger, with high V̇O2max expressed in absolute units (L.min-1). However, for most endurance disciplines, maximal oxygen uptake relative to body mass (ml. kg-1.min-1), is a stronger predictor of performance, under “gravity resisted” conditions where a relatively low body mass is beneficial. These differences across sports are mainly due to variation in biomechanical constraints, which explains why different scaling components of body mass are used when expressing V̇O2max in different sport contexts.

Back in the 1920’s a 6 L.min-1 was the top end for an upper range for V̇O2max. They assumed that this encroached on limits for pulmonary diffusion capacity and cardiac output. However, in 1979, Hagerman et al reported absolute V̇O2max nearing 7 L.min-1 in two elite rowers. Then 8 years later in 1987, Berg reported data from a 96 kg skier with a V̇O2max of 7.2 L .min-1. Later, Saltin reported an absolute V̇O2max of 7.48 L.min-1 in a Swedish cross-country skier. Among Norwegian cross-country skiers, five male athletes have exceeded 6.95 L.min-1 V̇O2max, with four of those being gold medalists in World Championships or Olympic Games. Recently, Miculic & Bralic reported that two Olympic champion rowers yielded 7.1 L .min-1 V̇O2max on average.

To put these exceptionally high V̇O2max values in a physiological context. A large male endurance athlete (approximately 100 kg) who achieves the improbable combination of a heart rate of 200 b.min-1, 200 mlO2. dl-1 a-v O2 difference and 200 ml. beat-1 maximal stroke volume would reach an absolute V̇O2max of 8.0 L.min-1 (but a relative V̇O2max of “only” 80 mL·min-1 ·kg-1). Each of these Fick equation components represents extremes rarely observed, or essentially theoretical maximums in highly trained athletes. For example, the a-vO2 difference of 200 mlO2.dl-1 would require a blood hemoglobin concentration of 17.0 g. dl-1 combined with venous blood oxygen concentrations as low as those seen on high mountain expeditions. Research has found that elite distance runners, skiers and cyclists have the highest relative V̇O2max.

Among world-class distance runners, V̇O2max 80 mL·min-1 ·kg-1 represents a reasonable mean based on observations of both European and Kenyan runners. However, tests of the gold medal winning athletes both from Kenya and European countries indicate that some of the very best runners reach relative V̇O2max values of 85 mL·min-1 ·kg-1. Kenya was included in the test as they are the dominant force in long distance running, as explained in our previous article Why do Kenyans dominate long-distance running. Somewhat surprisingly, the authors of the study are not aware of valid reports of ≥ 90 mL·min1·kg-1 V̇O2max among elite male distance runners.

Among elite distance runners and cyclists, V̇O2max values are typically ∼15% higher in men than in women

Cultural factors played a major role in the rapid improvement of women’s performance compared to men until the 1990’s. However, sex differences in performance time over standard distances among the world’s best endurance athletes in most events have thereafter remained relatively stable at approximately 8-12%. In this connection, V̇O2max is considered the primary factor explaining the sex difference in endurance performance.

In comparison to Saltin & Åstrand’s evaluation of V̇O2max in athletes of both sexes from numerous disciplines in the 1960’s, the gap between men and women has decreased substantially, consistent with greater improvements in women’s performances during this same period.

In the light of the equivalent training loads of male and female Cross Country skiers and lack of any change in the sex difference during the past two decades, a 15-20% difference in relative V̇O2max appears to be physiologically determined among equally talented and well-trained men and women.

Among elite distance runners and cyclists, V̇O2max values are typically ∼15% higher in men than in women. Differences in body size contribute greatly to sex differences in absolute V̇O2max, while sex differences in relative V̇O2max are attributed to a higher percentage of body fat and lower hemoglobin concentration in women.

From a practical perspective, peak anaerobic power signifies the greatest instantaneous power during a single movement with the aim of producing maximal velocity at take-off, release or impact. Anaerobic power is typically expressed as absolute (W) or relative (W·kg-1) external power output, since the upper limit of metabolic power is difficult to measure non-invasively with today’s methods.

Anaerobic power can only be validly expressed as external power output, which is in contrast to aerobic power where oxygen uptake can be used as a highly reliable proxy for aerobic metabolic power. It is currently impossible to accurately assess the mechanical efficiency of anaerobic power conversion, which in turn makes it difficult to interpret whether performance changes or differences between athletes are due to higher muscle metabolism or better mechanical efficiency. Additionally, with the proviso that the muscles pull in the same direction, the amount of muscle mass activated at the same time is almost linearly related to peak/maximal anaerobic power.

It has hence been demonstrated at an inter-individual level that the anaerobic power is almost directly proportional to muscle mass involved.  For example, the peak power measured in unilateral movements (running and cycling) is about half of bilateral movements such as a vertical jump. Finally, the time-power curve is hyperbolic. The steep left part of the curve shows that peak power drops substantially with only small increases in time. Indeed, a tenth of a second will have a considerable impact on the calculations of power and thus, the time for anaerobic power assessments must be strictly predetermined and carefully measured. Based on these considerations, it is not possible to assess a generic anaerobic maximal power. Comparisons of power values across modalities (e.g., cycling, jumping and running) are meaningless and each anaerobic power test must be treated separately.

The article goes into detail about findings on cycling, sprint running and jumping as well as ‘other modalities’. It highlights how athletes have become more powerful through getting stronger, fitter and technically better.

The sex difference for peak acceleration power normalised to body mass in world-class sprinters seems to be 16-17%.

More contractile tissue can produce greater amounts of metabolic power anaerobically and the larger muscle mass of men explains their advantage in this respect. However, because it is more challenging to assess anaerobic than aerobic energy production validly and reliably, few studies on the sex gap in anaerobic power have yet appeared. The sex difference for peak acceleration power normalised to body mass in world-class sprinters seems to be 16-17%, with similar sex differences typically being observed for countermovement tests. The corresponding sex difference (W∙kg-1) in cycling is ~25%. This difference which remains after body mass normalisation can be explained by the fact that muscle mass comprises a higher percentage of total body mass in males.

Several methodological considerations must be taken into account when interpreting the results presented in this study. The full study goes into greater details but the authors stressed that regarding V̇O2max measurements, it is crucial that the O2 analysers are specifically validated and calibrated for measuring the extremely high ventilatory minute volumes achieved by elite endurance athletes. It was also noted that varying exercise modalities (running vs. cycling or rowing) can also impact measurements due to variations in total muscle mass devoted to each exercise. They highlight the strict procedures required for the validity of the testing such as equipment positioning and sampling frequency.

Historically doping is a major confounding factor when interpreting human upper limits and sex differences. Various types of doping enhance performance with androgens/testosterone markedly enhancing anaerobic power. On the aerobic end, EPO or traditional blood doping augments total red cell mass and thereby aerobic power through expansion of a VO2 difference. The researchers acknowledged that individual or mean measurements reported in this review could have been influenced by doping. Doping tainted measurements would tend to narrow the sex difference reported here due to the greater scope for doping enhancement in females, particularly in measurements related to strength and power performance. The misuse of anabolic androgenic steroids were widespread in the 1980’s and are considered to explain many of the women’s world records established then, which have remained unchallenged. Whether there are differences between sexes in the effects of increasing red cell mass is yet unknown, but the lower hemoglobin concentration in women indicates that they might have a greater potential for improvements.

How powerful are we?

Extremely powerful male athletes may reach ~85 W∙kg-1 in CMJ (peak vertical power) and ~36 W∙kg-1 in sprint running (peak horizontal power), cycling (instantaneous power during force-velocity testing from a standing position) and rowing (instantaneous power). Similarly, their female counterparts may reach ~70 W∙kg-1 in CMJ and ~30 W∙kg-1 in sprint running, cycling and rowing. The presented values can serve as reference values for practitioners and scientists working with elite athletes. Compared to the comprehensive data published on aerobic and anaerobic power values in world-leading male athletes, there is a lack of corresponding data for women. Future studies should aim to fill this gap, in addition to outlining and establishing common procedures for power output assessments in typical anaerobic sports disciplines.

To conclude; who knows just how powerful we can get, however, if we continue to break barriers, which we no doubt will, the future looks exciting.